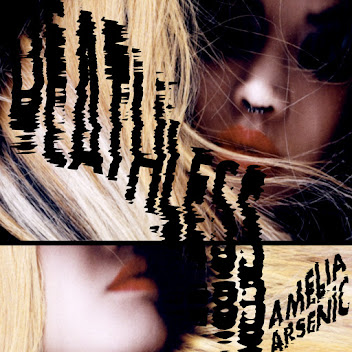 Former Angelspit vocalist is releasing this solo project . This came out back in Febuary , She has a couple of these eps under her belt. I would not call this industrial. It is goth influenced pop. Pop is not a bad word here as it means she has hooks and grooves that you want to listen to more than once. The first song "To Love is To Destroy" has a robotic pulse. There is industrial influence in the robot cadance she uses. "Wormwood' begins to run of the smae cold cyborg rap, until the chorus where she actually sings. I like how the vocals are layered there and the lyrics are all pretty great considing the vapid imagery this Stepford Barbie feel summons. There is a darker side to that is like the dark side of the robots on "Westworld" . Imagine them having a rave and that is what this sounds like.

"Purity" works of a different feel though the dead pan cyborg vocals approach the verses in a very similar manner. I do not think this song has the depth of the first two. Lyrically perhaps but I do not feel the music is really upholding them as well. The chorus where she sings redeems it some. It just has a more plastic feel. I would like to hear more than four song from her ,but when studio time costs money and there is no touring to support such an endevor I get why we are getting what we are getting and can see where that is going to continue to be a common place trend in the industry.

The title track is pretty much techno that is driven by her chanted vocal. They are bringing up almost "Rave Til Dawn" sounds.  Lords of Acid would be a fair comparison. I would like to hear more dynamics from her vocally as she is capable of singing and I think the sing song thing is more effective when given a proper contrast . For that reason I am rounding this down to an 8.5 , it is hard for me to say which one I like better this or the new Angel Spit album that she is not on? I think this album might have the edge when it comes to production as it sounds in some ways less 90s yet on the last song perhaps more. If you like the more techno side of what her former band did then this is going to be up your alley.