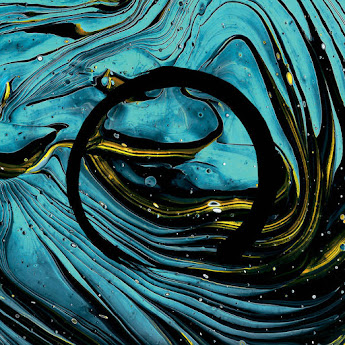 I have always liked what I heard from these guys,  but I guess not enough to stay on top of when their album's are being released as this one passed under my radar. The band's fourth album finds them slipping into the darker side of Radiohead. The vocals are light and drift into their falsetto often. Moodier than what I would call heavy. I do like the vibe they are creating here. There are more distorted eletronics to " Halogen Eye" which has a more Muse like feel to it, just with out the Queen like pagentry. "Slipping"  is gloomy power ballad that tortures itself with introspection in the best way. After "Slipping" it starts fading into the background. Some of this is due to the subdued approach to the vocals that do not grab you but become another layer of atmosphere. Evene when it builds up in a very post rock manner it doesn't have a great deal of punch.

They maintain this fey ghostly nature drifting into "Only Other" , but for some reason this song engages me more than the previous one. "Killing Spree" is the kind of dream induced ballad you might expecgt from Bjork. These guys must have dipped into heavier narcotics for this album. It does gradually build up in a manner that lures you further into the song. "Black Tide" has a more of a rock edge to it . This was needed as the album was beginning to float away. They fall back into Thom Yorke worship with " What We've Lost" . You could say well they are not like Radiohead as they have more of a trip hop, electronic , rock thing going on" . To which I would ask "Is "Creep" the only song you have heard. This song benefits enough from a cool melody that makes me look the other way to some extent.

Some of their more experimental moments work the best like "Spill on the Carpet" . The albums ends with less of a climax and more of an atmospheric whimper. Never the less it hits high marks and sounds great with it's only fault sometimes drifting to deeply into ambiance, yet I can not fault them for it as they accomplished what they set out to do . My expectations are a little more focused on a rock record. Some weed before listening.