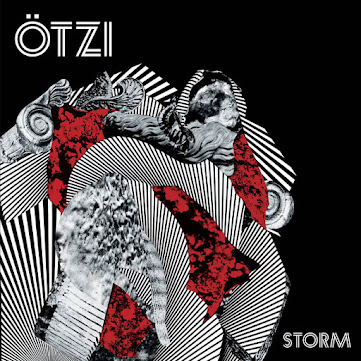 The first song is more in the Siouxsie like vein while the second song has a chorus that reminds me of "I Melt With You" by Modern English. The thrid song finds them falling back into the more punk side of post-punk. Even when they use these sounds more effectivly on "Scorpio" the main verse is kind of  color by numbers, though things like the sax onb the chorus and some of the more interesting guitar licks balance things out. Even if it's a synth making the sax sound it works. The more manic punk side of this still works when thye aexperiment enough with it. "Ballad of Oiwa" has a more dynamic sounds that plays to the benefit of their singer's voice and makes it one of the album's best songs.

After the previous song , going into a more punk sound feels like a step backwards for the band. They have show us they are capable of more making this feel like filler. Sadly after showing so much potential they begin to settle for just playing dark punk with songs like "Eight Cups" and Outer Bounds". The lyrics to the latter being more interesting of the two songs. Then they slow things down on "15 Stars" and allow mood to develop. As it simmers I can hear where the drummer is not yet committing to the beat so hope they don't fuck this up by picking up the tempo. They kind of split the difference as the guitar keeps doing it's thing and the drums build a marching tension before going into the color by numbers disco beat. The drummer is this band's weak link.

The go into more ofa hypnotic funeral march leading into the title track that closes the album., This brooding pulse is well layered and show a distinct difference in what is goth vs what is post punk. This song is what the band need more of as it plays to their strengths rather than exposing their weaknesses . I will give this album an 8 ,as there are a couple of great ones , many good songs, and a few filler. If you are a fan of the band you will be happy. If you like a blend of goth and punk, then this is worth your time.