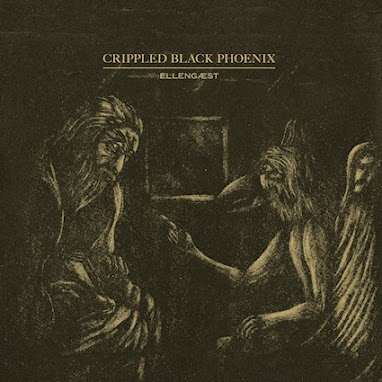 When a band loses their singer it can be awkward. These guys brought in other singers and went in a differeent direction. Dark enough to belong in Gothtober so you know it'sa direction I like. It's good to hear the dark side of Vincent from Ananthema. The are blended with the band's femal singer Belinda Kordic. It creates almost a Swans vibe, with a western mood in the background. It gets very heavy sonically, much like the Swans do.I mean I consider these guys to be progressive but not metal. Vincent sticks around for "Lost" . Kordic has a mor soulful approach than what Jarboe invokes, so more in like with a less dramatic and British Siouxsie. Vincent plays less of a role coming in at the chorus. I like the opening trak better this one kind floats around, though it still has drive. I guess I kinda check out and got distracted while the first song held my attention.

Ghaal does spoken word over "In the Night" . It's is even more western, but meets post rock. Ghaal can actually sing when he wants to . Instead we get this more Leonard Cohen approach. The female vocals float like a ghost around it.  He does eventually sing by the end of the song. Then Ryan from Fotocrime takes the mic for "Cry of Love". His voice improves with each recording . He is putting more melody behind it and not just doing an Ian Curtis thing. They are fully committed to goth here. "Everything I Say" is just Belinda by her self and it reminds me of a darker version of Patti Smith. There is some great guitar playing on this song.

I like how samples bridge these songs together . Johnathan from Tribulation steps up to the mic on "the Invisible Past". He doesn't growl he actually sings. Not the most powerful voice , but it works for what the song is doing.  Eventually he does open up and sing more. His upper register is well blended when he reaches for his falsetto. The song soars and he soars with it. Not what I expected from him. It's kind of funny that the two guys in the heaviest bands have the least heavy songs. When you cover one of my favorite songs by one of my favorite bands you are going to be under a harsh microscope. I think a female voice over 'She's in Parties" . This works because I do not think you think you are Peter Murphy . You are not . There is only one Peter Murphy. She knows she is not Peter Murphy, but sticks to what he does in a way that makes all parties she could be in happy. I will give this a 9. This is a direction I like to hear them going in. Not prog in the way they used to explore but prog in that it finds them progressing as a band.