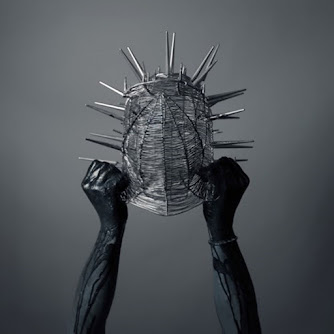 This industrial turn makes more sense of the indie rapper than the forary into black metal. "Vagabond" finds him going back to the rap like direction. When you combine the two sounds it feels kinda like nu-metal. It also reminds me of Death Grips at times as far as how he flows. I can live with this sound. But can I live with these songs is the question posed for the rest of the album. There is more of a feel to "Lazaretto". The glitched out groove are kind of cool. The lonest songs on this album are still under five minutes. There is more of an angry techno feel to some of the beats of "Sacralige" until it digs into a slower pound. "AI' finds things growing increasingly dark. The vocals carry a lower croak here. The guitars lock in harder here as well.

'Fed Up" has a darker groove with even lower of a croak to the vocals. The higher pitched rapped vocals sound a little like Limp Bizkit which might be a turn off for some. I mena I am not fond of Limp Bizkit , but can endure this. There is a clean guitar on "the Winds of Change". There are faint vocals over the drone of the guitar here leaving it to sound more likean interlude than a song."Hydrocloride" is angrier and more industrial than rapped nu metal. More techno sounds bubble up from the shadows of "Hellrap" . I can hear juggaloos being into this , but you do not have to be a juggaloo to listen to this. There is a more Marilyn Manson like tone to "AMSR". Funny enough he makes AMSR noises at various points of the song.

"Melanchoholic" might be the album's best song .Going from a moody Nine Inch Nails like groove to an explosive feral outburst. 'Calamity' is more aggressive and beat driven. It devloves into noise. It ends with another Nine Inch Nails like moment with "Falling Down" . The guitar just kinda drones . Leaving everyting to the more "Emo" like vocals. I think this is the best I have heard from him yet I will give this a 9.5