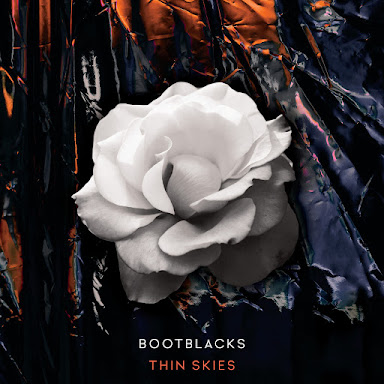 Leaning more into the electronic new wave side of post punk , I can tell from the first song that this album is going to be their best sounding. This is their first for the label Artoffact Records. It was produced by Jason Corbett of the band ACTORS. The second song finds them ebbing back down into more of what you might expect from this brand of cold wave. The groove is cooly detached as the vocal narrative. The title track has a darker more melancholy pulse. The synth around the vocals is more minimal. "Hidden Things " has more drive to it . Enough to get your booty shaking if you are high on coke in a New York club. Just when it seems like they might be getting too atmospheric for their own good on some songs they put it back together.

"Nostalgia Void' works more ofa droning sound and is less dynamic than most of these songs. I think "Brouhaha" works better as a song.Yeah I just mentioned cocaine earlier and now we have a songs called "New Lines" . There seems to be a theme developing. Even if this song is not about cocaine, cocaine is about the mood they are creating here with this song.I used to do a lot of coke to Depeche Mode, so maybe that is where I am finding the connection. I like how they use the Billy Idol 'Eyes Without a Face" clapping effect here. One thing I can say about this album is while it might not be post punk anymore, they are capturing that kind of tension with synths here. Kennedy Ashlyn of Them or Us, lends her voice to the background vocals .

The last song might be the darkest and most brooding. It opens with a more tribal tom pound from the drums. The vocals are more Depeche Mode, when not behind a hazy of ambiance.I would say this is one of the album's more interesting songs and perhaps my favorite aside from the opening track. They bring is a wide range of songs, it's pretty spectacular and what I wnat to hear more from in what these guys do. I will round this up to a 9.5 as I think this a very mature progression and certainly put this band back on my radar as an artist to have in rotation , I think this album will grow nicely on me and from what I know of them should be considered their best to date.