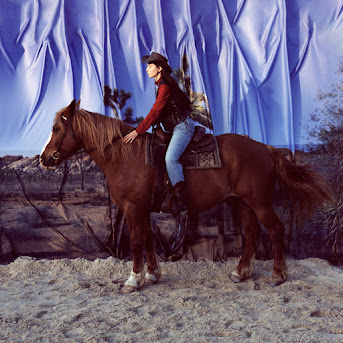 Somewhere between surf rock and country. Not unlike the Cowboy Junkies, I was lead to believe by another blog that this was a cross between death rock and indie rock. I am not sure what album they were listening to when they came up with that? It was not this one. It's not that I dislike this > I do not . But I also like this kind of alt country. The second song is a little darker. The vocals are more detached . This in turn makes the song less engaging. Even marginally less engaging means it does not maintain the kind of impact the first song had as the guitar begins to jangle along. "Midnight Cowboy" just kind of breezed by me. It did not grab my attnetion. I like some of the reverbed out guitar tones on this album.I think the vocals could stand to have more effects on them to create a more ghostly feel. But that is something I would say given my personal tastes .

The duet " Road Stars" is more folk like in how the guitars are strummed and the melodies around them .  "Matador" is a much more intresting song with eerie atmosphere creating a psychedelic tapestry behind it in a more 60's like manner. It is the darkest moment so far. There is a lazy summer feel to the pill popping daze of "Come on , Slowly" . It makes me think of what Lana Del Rey might sound like if she overdosed on Valium. This has more in common with slow core acts like Low than post punk in any way. I like the jazzy precussion of "Trouble" there isa little more rock n roll to the intent of the guitars. This breaks them from some of the weary waves of lethargy covering most of their songs.

The album ends with a more jammy tone to "Life Valley" . This fine because hearing thewandering guitar solo over the strum of guitar here is like the sonic equivelent of being on a lazy river. I will give this album an 8, they are great at what they are doing. It is not as dark as I personally like most of my music to be and the languid haze over it makes many of the songs havea uniform mood that rains all the time with too much sun out.