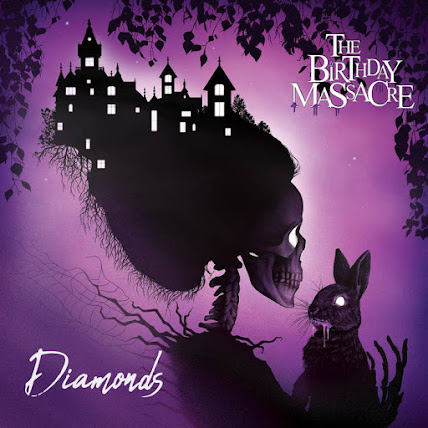 Before their was Chrvches these guys spran up on Myspace. Pop music given a dark goth sheen. Some times it was cosmetic only though on their newest album I can find a little more evidence to support their argument as being 'goth" on the second song. Though this is pop goth for girls who like anime. Not as happy as the first album I heard from these kids in the early 2000s. Most of the shadows come in the mabiance as felt on the title track. There are some kind of nu metal like guitars that mixed pretty low and often hard to differentitate from the synths. There is not a great deal of depth in what they do either sonically or meotionally , though this is better than other albums I have heard.

Chrvches is not as dark and they are going for something more appealling to a hipster pop sensibility than this band which is more Magic in the Gathering. "Run" is a little more pop, with lighter verses . So far it is the first song that strikes me a filer despite a decent hook in the chorus. The superior song and one of the album's best is " Flashback" . It is driven by a better groove and more interesting lyrics with some occult dabbling even if it's on the most basic botch Hot Topic level . Where "Last Goodbye' is too k-poppy for my personal tastes , "Crush' is an excellent song with a nice moddy throb.

I had to listen to "Mirrors" three or four times in oder for me to pay enough attention to form an opinion of it. It opens up with a beat that want to be industrial but does not have the balls to pull it off. It's ok but nothing to grab me. The last song however works for me.I will give this album an 8.5, these guys are good at whaty they do and maybe I wouild be more impressed if I was a teenage girl who played Pokemon Go at the Mall.

Email ThisBlogThis!Share to TwitterShare to FacebookShare to Pinterest
Labels: 8.5, pop, The Birthday Massacre