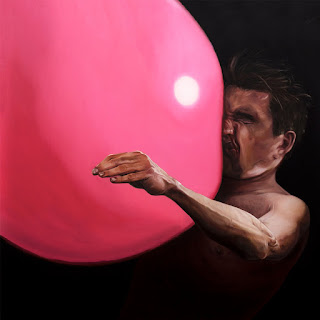 The opening track feels harder edged and more confrontational than their previous album. He almost sounds like he is rapping on the second song. It makes me think of what Rage Against the Machine would hae sounded like if they were from England. There is more groove to the way the vocals are accented. "Mr Motivator" finds them getting back to more of their straight up punbk side. The guitar has more of a surf rock feel in the tension it creates . He comes closer to singing on the chorus. This is much more in the line with the previous album. 'Anxiety" is as manic as you might a expect a song titled such to be.

The is more of a stacatto march to "Kill Them With Kindness" . Some of the sonic oddities the guitars create here reinforce that Rage Against the Machin comparison I made earlier. There is also a hefty dose of rock n roll to ths song. There is almost a Devo like sound to " Model Village". They explode out of this into a more conventional punk sound. The guitar however is more restrained. They blend a new sense of groove and attack on this album so I can not fault the Rage Against the Machine influence. Yes they are political here but through metaphor that doesn't shove their message down your throat. "Carcinogenic" doesn't gell like it gets it's feet until midway into the song but is powerful when it does.

"The Lover" relaxes as lovers should .This gives the vocals more room to breath. This guy is not a great singer or even a decent one, but it is more about where he puts his voice. "Hymn" is even more laid back and more along the lines of Iceage's more depressive moments. "Danke: closes the album with an interesting range of sonic power. I will give this album a 9, it is a solid step forward and takes their brand of punk into a new direction .