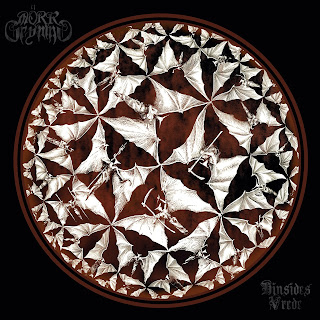 When the first acutal song blasts into play from the Swedish band's first album in 15 years , it confirms my fears and soldifies why I do not cover as much black metal . It is more of the same. Yes they do break it up with a melodic passage , but they are not doing anything at least in the first song that I have not heard Dissection or Watain do better. Blistering fast though to their credit not running on blast beats alone they storm the gates on "Existence in a Dream" . Are they good at what they do ? Yes. so if you like very meat and potaties melodic Swedish black metal then it is what you see is what you get here. They melodic sections they do employ are predictable and part of the formula, though at least they are making some attempt to write songs. There is marginally more to hook you into the second song, but they are going to the well one to many times already when it come to the pace of the third song.

The vocals are more of a discernable rasp, very mid range. " A Glimpse of Sky" is the first song I connect with it has more folk vocal elements and changes tempo. This is not to say it does not build in tensity or is not aggressive, you can have those things and still write a quality song like this. So these guys could still redeem themselves with me and the snarling attack at the onset was more of a 'Oh, were are a black metal band this is what is expected of us " sort of thing.  While I do want melody I think the concept of having an acoustic guitar interlude on your album to prove you can play, is a bit overdone . Why not just work that into a song ? Instead it's the quiet before the storm . Then another jack hammer fucking. Much like sex if that is all you do , they get numb to it and it loses it's effectiveness.

The more melodic direction of "Without Crown" was needed as the songs were beginning to run together for me and all sound the same. They go into Dead Can Dance like atmosphere going into "Black Spirit" which I am hoping they carry into the song not just blast off and leave it behind. While it does not happen in the way I would prefer , it is a better song than of of those of this album.  I will give this one a 7.5, if you are a fan of the band you will like it. Not going to win over any new fans though.