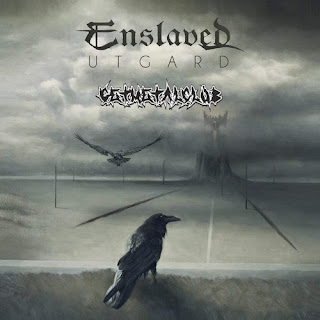 The first song finds these guys going back to a place that is more blackened and less proggy. Not to say it doesn't have those elements like singing and synths, they are just done in a way that feels more like viking / folk metal. The second song starts off with even more drive almost having more of an Immortal feel. This is not done is a way with any blast beats . There is also some melodic breathing room. It moves into dynamic passages and a peasing throb. It is a good example of a band able to bring you the familiarity of a sound you expect while still being forward thinking. There is something for every one, as they even jam out in place with the dialed back prog thing.
"Sequence" finds them going into the most groove oriented and accessible song yet. I am fine with this as it's so well done. " Homebound" has more of a rock n roll feel to the chorus, but once again all of this is easy to swallow as it is so well done. The title track is more of an intro for the grooving drive of "Urjotun" . I still do not think I have heard a blast beat on this album yet. I do know I can just leave this album on and let it play which is a good sign. The vocals either have a renewed nastines to their snarl or I just have not listened to these guys since the last album came out and forgot how they normally sound. They do come closer to a more traditional black metal sound on "Flight of Thought and Memory" .  They back off on the cleanly sung chorus which is the standard formula for them. There are some interesting accents , but this song falls a little short when it comes to what they have been delivering.
"Storms of Utgard" has more of a proggy swagger to it's groove. It is a song that is going to take a few listens to truly absorb, but I like what I have heard thus far of it. They back off the metal even further on the last song. By prog here we are getting into Emerson Lake and Palmer territory. I think overall this album finds the band getting heavier than some of their more recent releases while keeping their expansive sound. I will give this a 9.5 , it's more black metal than prog though not sure if it is a black as some of the black metal we cover here, regardless as great album.
Posted by Wilcifer at 8:25 AM