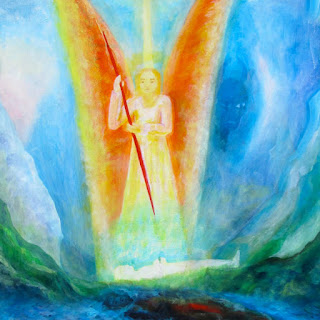 It's been 10 fucking years since their last full length "King Night" . I loved that album so the bar is pretty high, so when they opened up the album with some trailer park sounding symphonic hip hop I was skeptical, but they come back and give me just what I was wanting on the title track. It is dark and murky. Witch House resurrected in time for Halloween. If I still did cocaine , this is what I would be doing it to with some gothed out mentally unstable whores in a seedy motel. That is the image that come to mind. They blend the spooky atmospheric chaos  with hip hop  for "Crisis" . There is a more industrial punch to the nightmarish soaring of "Sears Tower" . I love the vocals on this one. They are produced perfectly. Jesus I have missed these guys.

"Starfall" is more like a pop ballad run thru a filter of futuristic narcotics. This is different for them. Perhaps not as dark as I want, but it is still them , so I live with this. 'Wings" kind of floats off from the mood of the previous song. I like the previous song a little better. This is almost more like an interlude. "Red River" is one of the lead singles from this album and rightfully so. It blends hip hop with the darker moods you came here for. "Old Gods" brings back the darkness. There is a Post Malone like quality to it. But the vocals are better has they become run through a distorted effect on the chorus. They song is really fire all the way around . This album might have a wider emotional range than "King Night" but "King Night" is darker.

"Braids" is just an instrumental interlude that might have been better served as the intro to "DieWithMe". How high were they when this song was recorded. I like the atmosphere. It is not as dark, but feels like opiates set to music. If I ever relapse it will be to this song. If one day you read on Cvlt Nation that I am dead, this was probably the last song I heard. "Not Much of Life" is a more conventional sounding song in some ways. I will give this a 9. It could have been darker. Yes, "King Night" is a better album. But this brings them back to us and I will take what I can get. With that said this is still excellent and far from just settling for what ever crumbs we as fans are thrown. I think they accomplished what they set out to do and really with 10 years between album we can not expect them to just pick up where they left off.