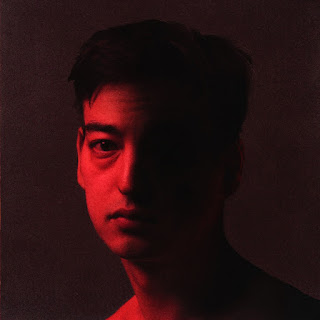 I downloaded this album knowing next to nothing about this artist. He is a former Youtuber from Japan who got serious about making music. There is a dark feeling to his brand of pop music that does not follow cookie cutter expectations. He uses interesting arrangements, I hear trip hop influence but I do not think that is where his music falls. He is somewhat soulful at times . Not the world's greatests pipes but he works well with what he has. In some ways I suppose this the perfect music for moddy Tik Tokkers. There are some interesting intervals being used. His melodies often have hip hop cadences in the chanted patterns they follow. Diplo joins him on the song "Daylight". All I know about Diplo is he makes electronic music , what his talent in that arena is unknown to me. This song has a more organic almost 70s funk feel.

"Upgrade" is the first song that feels more like filler. There are 18 songs so I am prepared for a couple. "Gimme Love" is uptempo , but his vocal works well with it. Between some of string arrangements and vocals layers there is at times a Beach Boys feel. "Run" is not only the best song on this album , but one of the best songs this year. It has some rock punch in places in the way the beat sits and a guitar solo at the end. His vocals work well over the relaxed beat to 'Sanctuary" . Sometimes his falsetto is stronger than other. He does not havea Prince like power to them as they are more breathy.  I like how the Eastern instrumentation gives a more sedate feel to some of the grooves. The dancier "Nitrous" is OK, but doesn't work as well as some of the songs that raised the bar for what you expect from him. The more trap like thump of "Pretty Boy' features Lil Yachty. It took me a minute to recognize his voice. I think "Normal People" is a better song.

The beat to "Afterthought" is strong, but the vocals kind of sit back in a very relazed fashion. There is an odd ambiance to "Mr Hollywood" . The production kind of varies from song to song though there are staples to the over all sound. There is a more Weeknd like tone to the playful pop of "777" . "Reanimator" might dip into synth wave, but it is more about sounds than being a song. "Like You Do" leans toward being a piano ballad. I will give this one a 9.5 it's pretty solid pop music that shows it can even be great .  This is dark for pop, yet fun at the same time.