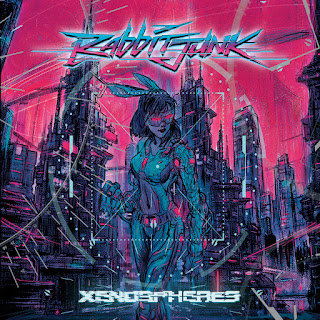 It's a mixed bag right from the start. These guys have a strong online following. The provlme is the guitars really sound like shit. They are super digita.l and really thin. It just doesn't sound heavy. The only reason I kept listening is because the vocals which are closer to a Post Malone style of pop on the verses caught my ear. 'the Bends" they are trying for a heavier sound which doesn't work thanks to the sub par guitar sound. I think these guys work best when trying to not have a metal sound . They are better at the more pop thing. As evident on the song 'Relentless". The key is less guitar the better. If you think "But wait these guys are a heavy band' then you do not know what heavy is and should go back to the trailer park and continue inbreeding.

"Prismatic' works better with the female vocal accents. The guitar continues to sound like a robot fart, which does detract from the overall enjoyment of the song. The reggae touch to "Angry People" makes it one of the album's best songs. The drum and bass thing works for these guys. Even when the shitty guitars come it , it'ss counter balanced by the other elements in place. This is the exception to the rule. The reggae touch does feel a little more like 311. Ok by this part I am going to quit mentioning how much the guitar sucks and only bring it up if it gets better and try to ignore it at this point. There is a more of a Linkin Park feel to "Curse". The vocals has a soulful touch to them and this guys is a pretty good singer, to made he does not have a lot of work with here. It is obvious these guys are very nu-metal influenced. If you are into nu-metal then the conversation regarding what good music is and isn't is already over.

The Peaches cover is odd, but they do an ok job with it. "Bits & Razors" has the nu-metal thng I was taling about earlier and finds them leaning more toward a Sliknot direction. Then there is this kinda meh electronic song that sends the album. Rounding this down to a 7.5, they have potential they just need someone to produce their guitar tone and get them off a nu metal diet.