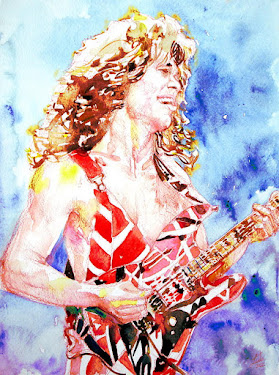 If you want me to tell you just because he is dead I was always the biggest Van Halen fan, then you must not know me.This might be the first time anything really about the band Van Halen has been written for this blog.."1984" was one of the first ten albums I bought, it was after "Shout at the Devil " and "Stay Hungry" compared to those two it was more of a pop record. I considered Van Halen the rock band for the sporty kids. People who liked to drink beer. When "Eat'em and Smile " came out I was in camp David Lee Roth.  Then an older kid I was smoking pot at 12 played "Unchained" for me. I went out and bought "Fair Warning". It was margially darker than "1984" and much more of a hard rock album. Eddie's guitar playing impressed me more almost every one except Randy Rhodes. My tastes in guitar players has expanded since them. I like to know some one has the chops to rip a solo, they just don't have to do it every song.

I  did not care for the first two albums with Sammy Hagar. They were even more mullet rock for the same crowd that liked Journey. Then this cover band I was in during High School wanted to play " Pound Cake" . So I bought the "For Unlawful Carnal Knowledge" album and like it. The moved toward the 90s. I lost track of Van Halen after than. I have owned all of the pre- 1984 albums at some point. "Fair Warning " is still may favorite. During my heavy drug days , they were more of  cocaine at the beach sound track. But much like their music I can only do so much sun. c. But it was normally guitar players who put them on.  Musically the were not dark enough for me. Yet to his credit on "Fair Warning" you can here how he blends elements of funk and jazz into his own signature sound.

My favorite metal guitarists like Trey from Morbid Angel cite Eddie as an influence.  Bands that I am into who are influenced by his playing also include Alice in Chains, Pantera, Queensryche, Adam Jones, Motley Crue,  and Skid Row. I might have grown away from their music as party music no longer resonates with me and when I am in the mood for that kind of thing I tend to put AC/DC. But I am listening to "Fair Warning" as I write this. His tone is unmistakeable. He has a very tangible fire to his playing. I think he played off the chemistry between him and the original line up and what they created together is a moment in time we could never go back to. I am not going to say he has left a void for me, since I rarely listen to them, but their music does transport me to a place in time. It was a place in time where I enjoyed music for different reasons than the ones I enjoy them for today.  Sure he might have groomed a generations of shredder's but after giving " Fair Warning" another listen , you can hear  he is not just throwing notes at your ears to see what sticks, but he is telling another part of the song's story. That is what they failed to imitate. There will always be the same fire when ever I press play to "Fair Warning" .