Wyrd: "Death of the Sun" 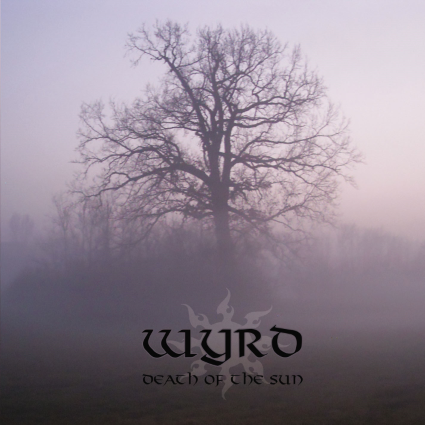 This Finnish Pagan metal band has a very black streak to them. This is the band's 9th album so they know what they are doing. If you were to judge this band by the first song you would assume they were going to be another black metal band. They go in a more Agalloch direction on the second, that has more of a subdued croak to the raspy vocals and acoustic guitars to create an almost dsbm feel. I like the fact these guys are so dark, When the clean gothy vocals chime in its something I was not expecting. Production is this album's only weak spot. The guitar tone on "Man of Silent Waters" sound like its coming from a transistor radio when they stomp on the distortion. There is more of a traditional pagan metal gallop to "the Sleepless and the Dead". The guitar gets trashier than what you might normally associate with pagan metal. The clean vocals are mixed in a little weird on this one and detracts from the over all quality.

"Pale Departure" finds them back in the mode of old Agalloch. They are a little more depressed than Agalloch and sometimes the harsh vocals sound like an angry Gullom. This was released by Moribund Records. "the Pale Hours" is full blast ahead with a side of frolic hidden in the blur. Even when the folk element sneak out to do a little dance out of the cloud of dust left by the full speed ahead black metal, it doesn't do much to switch it up until the last two minutes of the song. Even then it's built back up to the same hyper intensity. "Inside" is weird as it finds them trying to go for more of a Bruce Dickinson vocal. Musically the song is on point, but this sounds more like "Wicker-Man" era Bruce as the energy in their singers voice is waning. The growls to make a comeback when the song builds up into a heavier section toward the end.

This is not the band's only excursion in to more straight forward metal as the onset of "Cursed Be the Man" is pretty much no questions, take no prisoners head banging. "When Spirits Walk the Earth" finds them back using the Agalloch template with the soft to loud dynamic. The acoustic guitar tone on this album is often better than the distorted tones, though here the more aggressive guitar sounds find so not sure why the inconsistency. This formula is also intact on "Rust Feathers", though I like the sudden bursts of heaviness here that foreshadow where the song is going. The muffled clean vocals don't really add much to the song. Really the production issues could have smoothed some of the little awkward quirks that kept this album from really blowing me away. It's a pretty solid piece of Agalloch inspired pagan metal any ways I'll give it an 8.