Graves At Sea : "the Curse That Is" 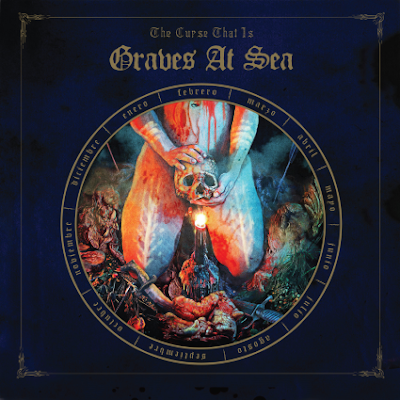 I had been waiting for these guys to drop a full length as the splits and eps were great, but I wanted something more to sink my doom hungry jaws into. Doom begs to be questioned here right from the eleven minute title track that opens the album.  It's an odd evolution that includes the bigger production value this album has. It finds them thundering into your ears with something more akin to a stoner rock version of "Through Sliver and Blood" era Neurosis. Some evolution an be expected considering the line-up changes that have yo-yoed the band about. The vocals are still mean in their ample grit coated screams. The guitar has warmed up a bit. Perhaps it is the time they took in the studio to perfect their tone versus previous releases which have had a rawer, angrier sound. It's not a deal breaker. I can appreciate the expanded musical qualities they invested into the songs here, it is just going to take a little getting used to.

They slow enough on "Dead Eyes" to give them a somewhat more doom oriented sound. The twisting curves of the riff have a more rock n roll feel to them. They are well executed. The lyrics are more intelligible here even in their most scorned and rancid throat scraping rasps, which call out some very memorable choruses. That is what song writing is about after all no matter how heavy you want to be. It needs to bring you back to the songs over and over again. The demented slant to the vocals which drew me into the band in the first place is still there, though much more familiar in the second song. There is an almost Iron Maiden like cadence to how the riffs dance in the song's final act. While it never gets to the happy go lucky arena rock vibe of classic metal the influence can not be denied even with the shadows cast by Alex Carson's violin.

The crazed vocals carry a higher rasp on "Tempest". This song is attacked with a swampy fury not unlike that off Eyehategod. While it is very powerful it is also the most straight forward of the first three songs. The violin returns to accompany the clean guitar that opens the fifteen sprawl that is " Ashes Made Her Beautiful". It lurches into the deliberate pound of the verse, that offers up some bong boiling worship to the path Sabbath paved. In sections this finds the band at the most melodic I have ever heard them play. The violin earns its place on the album when the song reaches the six minute mark. The vocals into a more haunting lower rasp. At this point in the album the mood here  finds the band digging themselves down  the closest to doom as they have come the entire album.

Though it's pretty punchy the more upbeat "This Mental Sentence" has more of an almost rock n roll swagger to it. They get back to down and dirty basics on "Waco 177". It's the kind of heavy metal depravity that I pretty much expect from the band. Lyrically it pays homage to the fall of David Koresh. Serial Killers tend to get way more love from metal bands than cult leaders so it's a nice change of pace. "Luna Lupus Venator" is an acoustic instrumental interlude leading into the last song "Minimum Slave". I'm not too worried about the fourteen minute run time of the last song, as none of these songs have felt like they are dragging. It's a burly stoner metal riff, that has a sinew groove that recalls Tool or Kyuss to me. Though funny enough most people who will praise this band would slam Tool. The vocals do keep these guys more firmly placed in the metal camp. I wouldn't say the band jams, but they do allow the groove to wind around them.  They do crush it with a pretty molten riff. I'll still round this album  up to a 9.5 as it's going to take some getting used to the change of sound, but I do find myself wanting to go back for further listens despite the long winded songs, so something is working.