Up From the Underground : Phlefonyaar's "Kissing Carrion" 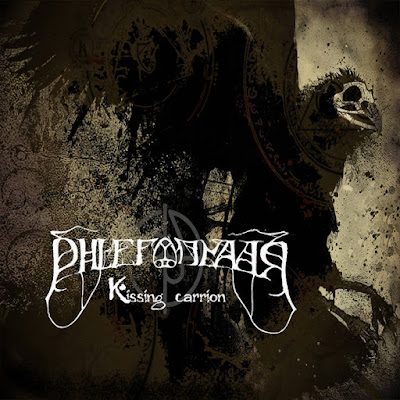 Here is an album that is ugly in all the right ways. The intro this album which saw the light of dawn back in February sets the stage to be suitably dark. This band from the UK treads a pretty spot between sludge and industrial. The distorted vocals are more shouted than screamed.The pace is still very deliberate and pounding, but picks up into a tank like roll on " Castigation on the wings of crows". One thing I like about these guys is the layers of atmosphere added to the beating they dish out on your ears. The songs have abrasive qualities, but never abrasive for the sake of just roughing up your ear drums and challenging you to keep listening. Instead it draws you further into their nightmarish post- apocalyptic landscape.There is a burlier and more straight forward hammering to " All hail the red duke of loss". They do not relent. The beatings continue until morale is improved.The melody that does surface sits oddly against the more distorted body of the song, to the point of me thinking I had another window open on my lap top that was playing. There is a more angular quality to "Wretched Thing of Blood". The vocals have more of a howl to them. The lyrics remain easy to understand in thick of the din. The more industrial elements wane some as the album progresses making this more solidly sludge, though there remains an experimental electronic ghost continuing to haunt the frayed edges of the songs.


If you lean more heavily towards sludge I think you will not be disappointed. This album proved to be a great listen I liked the first two songs that followed the intro piece the best, but appreciated the more plodding chug of the second half of the album. I'll give this one an 8.5 and look forward to hearing what the future holds for these guys. Being an old goth from way back I of course want them to help bring industrial back, but at heart this beast is more of a collision between Godflesh and Eyehategod, if you took milked all crust of  the New Orleans punk out of Mike Williams' band . But as you can tell I did not immediately reference either band in the meat of the review since they have their own thing going. Do yourself a favor and check out the album below.
3.3
Posted by Wilcifer at 8:27 AM