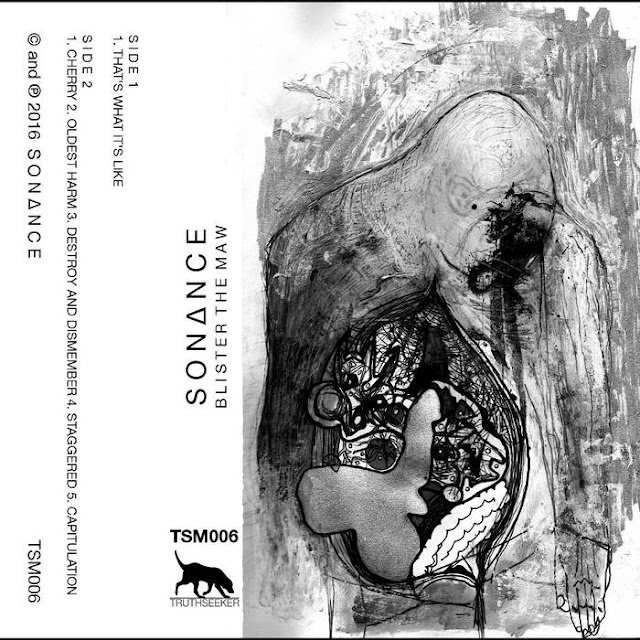 These guys are back and the experimentation is heavier than the music by the half way point of the thirteen minute opener. Mainly whispers and feedback with a brooding bass line. A lot of noise has come this blogs way in the past week and I'll say here what I've been saying in other reviews, that I love Swans, I can handle noise as long as it brings a pay off and used as a dynamic tool. Here the pay off doesn't come in the first 13 minutes, which effectively makes that wasted time. A side note here...since this review was written, in the comments below it was brought up that due to the fact real instruments was used to make this noise, should not make it but make it a real song. So how we define real songs around here is .....establishes some form of melodic merit. For 13 minutes no melodic merit is established, so it's noise, and just like Pinocchio wishing to be a real boy just because you have instruments, wishing alone doesn't mean you are making music since music is defined as

the science or art of ordering tones or sounds in succession, in combination, and in temporal relationships to produce a composition having unity and continuity vocal, instrumental, or mechanical sounds having rhythm, melody, or harmony

no melodic order to your tones = not music


The first real song"Oldest Harm" kicks ass. It brings more of a punk influence to the table than I remember from their last album. This is taken in a more sonic direction on "Destroy and Dismember" which does actual feel like it has a Swans influence to it. The vocals are an almost more hard core choked shout.The melody that sweeps though the background of the song is cool, but I'm not sure it lives up to what they gave us on 'Blackflower". This doesn't mean this is a bad song, it's just the bar is raised pretty high for these guys. They come closer to reaching more of the balance they struck on the last album when they get to "Staggered". The bass keeps things creepy and fluid, the vocals are more screamed and growled in the layers of harshness coming from their throats.


The last song "Capitulation" is just a noisy outro, for the sake of this review I am not even going to count it. Sure this is being released on tape and it's basically an ep. I'm counting the first song, because it must take up the first side of the tape and as long as all the real songs put together. So for that reason it brings this albums score down to an 8, if we were just talking about the three actual songs then it would be a 10, but they are the ones who threw the first 13 minutes on there so I am guessing while it might have been a mistake it was not an accident.
Posted by Wilcifer at 6:06 AM