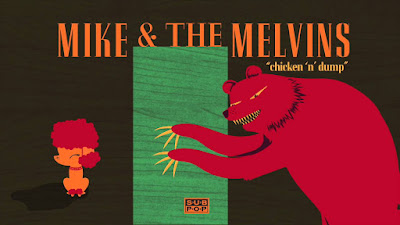 This album was supposed to come out 1 years ago, so it's a little late. When I clicked on this I hoped the Mike they were talking about was Patton, but no such luck this time. The Mike in question is Kunka from the band Godheadsilo, yeah, I know if this album came out 16 years ago you might still remember who that is. Doesn't feel much different than what you normally expect from the Melvins. There is a similar pace to "Limited Teeth". Kunka's voice is a crazed croon, that seems even more nuts when placed out some of the Melvins more metal moments. There is a straight up Kiss like riff in one section of the song. I can say I do like this right from the get go more than the Melvins last studio outing. There is more of a 90's grunge...think Mudhoney, meets the Butthole Surfers feel to the more chaotic pulse of "Bummer Conversation". The vocals get a little obnoxious at the onset of  " Annalisa". The song itself is a pretty straight forward Amp Rep style stomp. I prefer the darker turn they take on "A Dead Pile Of Worthless Junk" , even though as a song it's less tangible.

They bring the rock out on "Read the Label" a song that plays to everyones strengths. The grit on this album might be attributed to Mike Green of the Fucking Champs who recorded this. Kunka's bass tone really carries the song. "Dead Canaries" sounds like if Primus was possessed by Nick Cave. "Pound the Giants" is like a more metallic take on the Dead Kennedys. It lives up to the title but is pretty straight forward. "A Friend in Need is a Friend You Don't Need" is an interlude that is a drum solo mixed in with some crowd samples and rallying narrative. They get into the kind of rock I want from something like this on "Lifestyle Hammer". The melodies work hand in hand with what the rest of the band is doing. "Gravel" finds power in it's noise rock rumble, with vocals smoothly flowing over it until it's time to be abrasive.

This album closes with the spastic burst called "Art School Fight Song" that finds them engaging in the same kind of crazy ape-shit silliness that grind core and power-violence bands of today  make common practice.  I'll give this album a 7.5, it hits more than it misses and makes for an interesting pairing that is not too far off the mark from what the Melvins normally bring you.