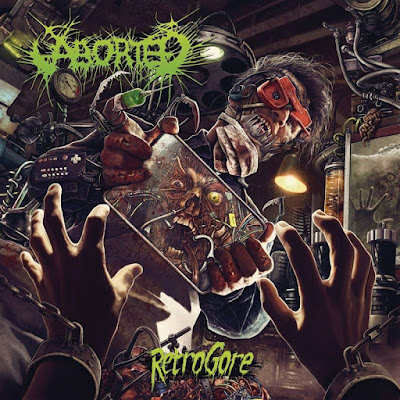 It starts just like you might imagine an album by these guys to start. The title track is packed with ripping double bass and gurgled vocals with razor sharp riffing slicing at you from every direction. The higher snarled vocals have a more black metal feel than the lower ones, but these guys are still not blackened anything. There is more melody hidden under this brutality than I expected. They throw every thing at me in the first song, which leaves me to ask ...ok that was pretty heavy, what else can you do? The answer in the second song is pretty much more of the same, but coming at it from different directions some of the time.There is no question that these guys are masters of their instruments and the shredding solo reaffirms this. "Whoremageddon" might have an awesome title, but the problem a run into with the bulk of death metal begins to set it as it all starts sounding the same and fading into the background. "Termination Redux" begins to redeem them with more of a groove, but it's easy for this to also get lost in the storm.

There is a sense of melody that hangs over the chords, before they shove the riffs down you throat with extreme prejudice on 'Divine Impediment", but it's simplified savagery on "Coven of Ignorance". Then after that point everything becomes a blur of double bass and jagged growls snapping out at you. The drummer is good, but to play this kind of thing you have to be. It would almost be more impressive to hear him hold down a slow groove. When We get to the final song "From Beyond"it's all become a blur and where the double bass meets the chug is obscured by a sonic dust cloud."In Avernus" really doesn't break to much new ground. The melodic elements are resigned to carrying a more atmospheric element.

This is as solid as any new school death metal album that puts the brutality first. They do keep songwriting in a close second so I'l give this one a 7.5. This is not really the kind of death metal that is my thing if you checked out my review of the new Howls of Ebb, you might get a better idea of where I am coming from. If you like new school death metal that's just about the bite then round it up.  They achieve what they set out to accomplish. This album is really well produced and has moments that impress.