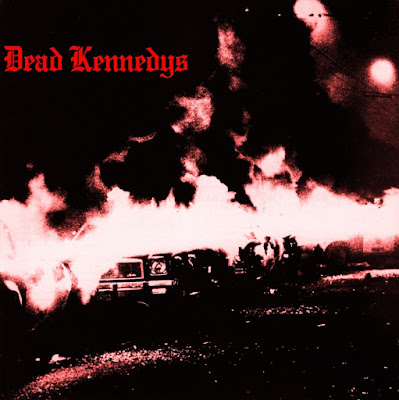 To celebrate their 5th anniversary  my friends over at Cvlt Nation are releasing the next installment of their Cvlt Nation sessions, this time they pay tribute to the Dead Kennedy's classic "Fresh Fruit For Rotting Vegetables".  Haarm starts off with a rough around the edges version of "Kill the Poor". This finds the singer with the mic crammed into his mouth for a burlier take on the vocals. Going into this I had to tell myself to get over the fact that no one was really going to go Jello on this. The lo-fi hard core attack continues as Plagues savages "Forward to Death". The first band whose singers captures a more Jello like feel is Hive with their rendition of "When You Get Drafted". This is a good balance of being themselves and paying tribute to their forefathers. Guilty Parents have some big shoes to fill as it hard to top Faith No More's version of "Lets Lynch the Land Lord". This version pays more respect to the song's punk heritage. While they recorded this in equally rough hewn fashion as the other bands, everything falls in place in a more cohesive manner.

I appreciate that Dethfox goes to a darker place for "Drug Me". The vocals are a little buried in the mix, but it works here. Secret Cutter is the only band on this compilation whose albums I own. As expected they pack more of a punch with their chaotic take on hardcore while bending over "Your Emotions" and throwing in a little Jello while they are at it.They are the heaviest thus far .  Good job guys. Rabies is snotty old school punk, so they kick out all the right jams when it comes to "Chemical Warfare". PS Fuck You has to know the pressure is on when it comes to "California Uber Alles". The vocals are more of a metal growl. They deliver the goods in the sense they hit on all the key moments in the song that connect with you. I even went and looked up their Bandcamp, but they haven't done anything since 2014, so here's hoping for some new music from those kids soon.

Piss kicks up some crazed punk spasms with a feral version of " I Kill Children". Dark Circles delivers a more metallic snarl on "Stealing Peoples Mail" with feed back squealing out in more a grind core fashion from the corners of the song. The burly bass line on Bou Quet's  version of "Funland at the Beach" lends a more muscular Black Flag like take on the song. A noisy blackened bile is spat out of Purge's  more brooding "Ill in the Head". It almost comes across like the Doors freaking out on acid in hell. The pressure is on Fever Nest in a big way to come correct on "Holiday in Cambodia". It's a darker version than the original for sure. The Coltranes are cut out to pull off "Viva Las Vegas" and the pretty much do while adding a dash of zaniness. I'm impressed that they pulled out the acoustic guitars. They close it out with the rough and rowdy "Police Truck" that Mower collides with like they are attacking a Motorhead song.If you are Dead Kennedys fan then you might just discover some new bands here,as more often than not the originals are respected and done justice.