Church Of Misery : "And Then There Were None" 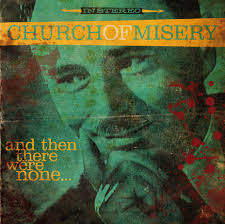 Here is the 6th full-length, that continues the band's tradition of penning songs about serial killers. The have a much more stoner metal sound on this one.The bassist Tatsu Mikami forges ahead with a lineup featuring Scott Carlson from Repulsion, contributing the vocals to this one. They are delivered with a Cathedral snarl. The guitars are handled by Dave Szulkin from Mark of the Devil / Blood Lust. The drums are pounded by Eric Little of Earthride. Production wise this album sounds good, it adheres to the retro sound required by this kind of thing.  The vocals are up front and add more punch to songs like "Make Them Die Slowly".  The vocals are narrated in more of a Tom Araya manner, never really committing to a full scale growl to keep the lyrics the focal point.

"Dr. Death" kicks into a more rock n roll groove. Carlson comes much closer to singing here. He doesn't go into an actual croon, but is more melodious than say Tom Warrior who is the first vocalist that comes to mind on this one. The rock n roll begins to gain the upper hand and usurp this projects metal roots on " River Demon" which is straight up rocking a full tilt boogie, past the point of Sabbath worship. They begin to enter Clutch's zip code musically, its the snarling shouts of the vocals that keep them from committing to this. They do regain some of their heft on "Confessions of an Embittered Soul". It gets darker and takes on more of a creep. It feels like if Slayer decided to become a Black Sabbath tribute band, which at this point might be a better career move. Sure the samples aid creating the ambiance, but the interlude "Suicide Journey" only teases you with what could have been a cool song.


By the time they end it with "Murderfreak Blues" a lot is riding on them giving you the type of heavy metal payoff their legacy has promised. It is more of a curve ball with a more blues tinted groove, that is not really doomy until it builds back up. It's a more dynamic song than most and one of the albums better moments.This album is pretty good for what it is. If you want some old Sabbath like odes to serial killers and vocals are more about attitude than ability to you then you might round this up from the 8.5 I am giving it. That is above just an acceptable score into torn as to how much I might listen to this, certainly not opposed. I think it's just a case of when I am in the mood for this sort of thing I already have the position filled. If you are a fan of the band and reconciled with their more rock direction then you too will enjoy this. There's some pretty great guitar playing in places and whats not to love about serial killers?

Email ThisBlogThis!Share to TwitterShare to FacebookShare to Pinterest
Labels: "And Then There Were None", album review, Church Of Misery, doom, Japan, Repulsion, retro rock, serial killers, stoner rock