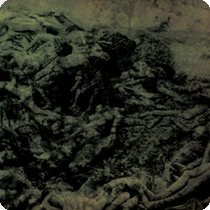 I get a ton of band's submitting their stuff for me to cover here. You might wonder why I pick the bands I do to cover. Perhaps this review will shine light on that process, if you are a band wondering if you are right for my site, Obviously I cover those I like, but for the more obscure, underground acts I haven't heard of until I review them it depends on how they are presented to me. Every morning when I check my email there are any where from four to ten new albums sitting in my in-box. I eliminate many off the bat by genre, generally terms like Technical death metal, djent, metal core, power-metal and thrash get them eliminated off the bat. From there I look at influences, which was key in why I decided to cover this band from Oakland, CA. Abstracter list Swans, Godflesh and Blut Aus Nord as influences. Granted all three of those bands depending on the era could yield much different results depending on what you keyed in on. They call them selves blackened sludge, but they feel more like a noisy death metal band on their first song. I do like the fact that they are really dark and use a cleaner guitar tone leading into the second of the two songs on their half of the split. They don't really sound like the band's listed as their influences, which is normally the case, but when you are shooting into the dark you hope you hit something close. There is more of a sludge like throb to the second song.The drumming is pretty impressive, however to be a metal drummer you generally can't be a slouch unless you are playing really slow doom. At the seven minute mark it picks u[p the pace into more of a groove.

The problem is that when Dark Circles have of the equation kicks in I don't notice until they go into a more punk beat. The guitar has more of a chaotic clang. When they slow down it doesn't come across as being as dark. I'm not sure these two bands were the best choice to do a spit with one another. I think a split should offer band's whose sound is different enough to compliment one another and not just form a interchangeable blanket of feedback driven riffs. By they get to some atmosphere it's a little too late and it's more of an outro rather something that works in the context of the song to provide more dynamics. Well one less album cluttering up my in-box is one way to see this. I know many of you like monochromatic heaviness and will appreciate this density. In that case this maybe well worth your time. If you are band looking to send me your stuff check this out and if you sound like this don't send it to me. After all I just heard this and I am looking dark something that is dark yet doesn't sound like something I have heard a hundred times.  This just came out on Sick Man Getting Sick Records.
Posted by Wilcifer at 4:09 AM