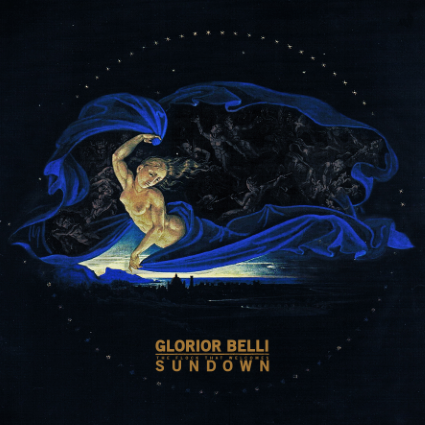 Here's the new one from the French"black metal " band that sounds like they are from New Orleans rather than Paris. Their sixth album blasts back with renewed blackness. They emerge from the storm with a pounding groove that undulates in a manner more akin to Watain than the Southern dipped blues encrusted blackened sludge they spat out on the bas two album. The bass player really flexes some tasteful chops with a keen ear for melodic embellishment on "World So Spurious" .  They delve back into the more black n roll side of their sound on "Rebels in Disguise". The meaty riff lumbers with bong boiling fury, This might be another step back away from black metal, but they pull it off so well it's hard to argue against it.  This is the album's only excursion back into the more swamp metal like phase of the past few albums so if you became a fan during that period because you are actually not a a fan of black metal then this might be the only song on this album you like.

It's go black or go home even in the dissonant brooding that opens "Thrall of Illusions"before the song finds the blast beasts back in action. There is a very dense darkness that makes this thick slab of speedy wrath so effective. I am not a fan of being heavy for the sake of being heavy. There might not be as much dynamic range to this album as the albums that strayed further from black metal, but whatever urges they needed to go explore provided lessons that keep them from sounding like every other black metal band. The vocals carry more of a croak than a growl the majority of the time and don't make attempts to actually sing. The bass player continues to be this band's unsung hero as he adds a layer of depth to the songs. The title track finds the band comings close to a more traditional black metal sound, but it is not attacked such an animalistic energy that the finer points of song writing are disregarded by the blur of sonic hypnosis that so often occurs.


The oddly titled "Satanists Out of Cosmic Jail" hammers at you with some impressive drumming and a groove hidden in the sonic density. This is broken up by a sample before they hit you with a maelstrom of blast beats. This is more about assaulting you than connecting to anything but a feral blood lust that finding the fangs of these riffs going for your ears. "Upheaval in Chaos Waters" gives the more croaked vocals room to breathe, still finding the band's spiked boots firmly planted in black metal. There is more of a cold tremolo picked eeriness before it's was in the flood of chaotic waters. The dense bass line provides more of a tangible back bone in parts of the song. If Abbath's solo album wasn't black metal enough for you then you'll appreciate this song. There is a similar intensity level to "We Whose Glory Was Despised". If you want a black metal band from France that isn't trying to be Deathspell Omega, here are your boys.I'll give it an 8.5.