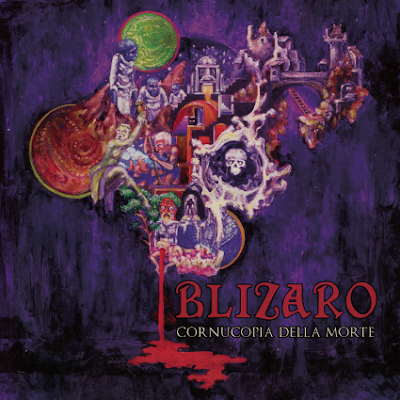 I'm not sure if Ghost is to thank for the current trend of bands digging in the vaults of record stores for elusive copies of albums by Coven and Black Widow to re-create the creepy horror psyche that pre-dates metal. That is not to say the album doesn't owe anything to Black Sabbath as some of the more lurching harder riffs do. The over all vibe is very late 60's proto-metal. Main man John Gallo's voice reminds me of Craig Wedren from Shudder to Think, though not as flamboyant. Though I can also hear some Candlemass in there as well, he just doesn't have the operatic power to bellow it out like Messiah. Their is more of a metallic feel to the  second part of the four part Nemesis song cycle that opens the album. The guitar playing get more impressive as the record progresses. The vocals benefit from the effects slapped on them for the fourth part of "Nemesis".

Dripping with vintage synths there is a pretty smooth groove to "Giallo". Some of the keyboard melodies to bring to mind  horror soundtracks of the early 70s.There is a loose jammy feel to this song , which I imagine works really well live. This proggy vibe carries over into "Frozen Awakening". This turns back the clock to the early days of what we now think of as metal. The drummer shows his chops on this one and the guitar takes on more of a chug to the point of getting closer to Diamond Head's back yard. This builds into a rawer fury by they time they get to their cover of Paul Chain's "Voyage to Hell" invoking a more primal version of Candlemass.

The trippy synths return on "the Staircase". The song warbles to life with the groove shifting under the heavy layer of Moog. This is another jammy instrumental. The guitar playing is not shabby at all and this is sure to be a good time live, but not something I would listen to on my iPod on a daily basis.  "Stygian Gate" rocks like early Iron Maiden. If you were being lead to believe this album is doom, my only question is "Is "Killers" a Doom album ?"  If you answered yes, it's still not too late to drink Drano. The instrumental section continue to impress, but also come across like they are just jamming. This album made a pretty good first impression on me, I am unsure how much of a craving I am going to have for repeat listens, but I will give this one a 8.5 as it succeeds in doing what this album set out to accomplish, aside from the fact this is not a doom album.