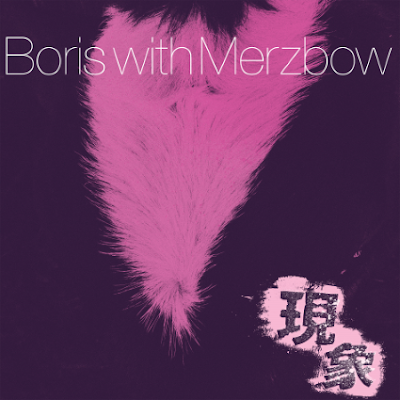 2016's trend of collaborative efforts is still going strong with this offering from Boris and Merzbow the latest installment. I synched the two sections of the album, the Boris song that opens the album with the tenth song Merzbow's "Planet of the Cows". The Merzbow contribution was overpowering what Boris was doing that seemed more interesting. So it's recommended if you try this at home to turn down the sound on the Merzbow half if you want a more musical experience. About seven minutes into this it seemed like a good idea to keep turning the Merzbow side down. It's pretty much just squealing static. Sure it keeps Boris' side from becoming to ethereal, but lends little to aide melody or the overall dynamics of the song as it' just a texture of white noise. On Boris' side of the coin the distortion was the only thing that made me realize we had moved onto another song. It has a more metal tendency more in line with the band's earlier work. This shifts into noise on both sides of the coin for "Resonance". It's just noise for the sake of noise.

"Rainbow" finds Boris a little more focused on songs. Soft female vocals glide over the guitar. The vocals are so soft it begins to make me reconsider my choice to play both parts at the same time. By "Sometimes" I finally relented and turned down the Merzbow half even lower. Boris is not doing much more to make it a song until the hum of feedback kicks in. Actual singing follows this. It makes for a very odd droning ballad. There is a similar though more shimmering feel to "Heavy Rain' that follows. "Akuma no uta" finds droning waves of distortion bathing you. At this point the Merzbow side of the coin stopped , perhaps I just needed to click on the next track, but i think i had just about enough of that . I can only imagine that "Akirame Flower" has to benefit from not have the layer of noise under neath it. It's rather shoe gazey as it is. Things get fuzzy again with "Vomitself". Groaning vocals come in over the jagged feedback and burly distortion, but it never forms into a real song.

The important question to ask yourself going into this is how much noise do you like ? If you are a regular reader here then you know I am a big fan of Swans, so I can digest a reasonable amount of noise if it works in the context of a song and is not just noise for the sake of noise. I would have preferred Boris writing an album of actual songs, they more shoe gaze like direction would be better explored in the context of what they are more capable of doing. For what this it at times became something more to be endured rather than something enjoyed so I will give it a 4.5. Mark my words all who put this on their album of the year lists in November are not to be trusted. Relapse is releasing this "art work".