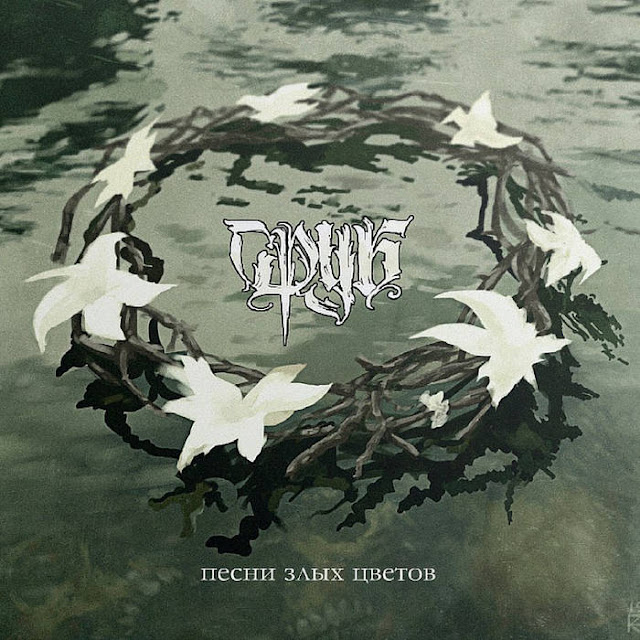 There has been little in the way of good Halloweenish goth coming out so this project was discovered just in time. Very dark wave in the sense that all of the beats that open us the album would get a dance floor moving. The operatic vocals are full of drama and a well departure from another band just trying to rip off Sisters of Mercy. The lyrics are all in Russian which makes the vocals sounds like they are being used as an instrument than moping about lost love. The second song backs off from the dance heavy impact of the opener and finds the vocals whispering. Two minutes actual singing comes in. It's not as graceful as it was on the opener and there is a slight neo folk weirdness going on. It's like a darker version of Psychic Tv. The third song is more melodic in a similar vein as older Cure, though Vhs or Beta's less disco moments come to mind as well. The vocals less over the top than they were on the first song.

Leaving no dark corners of the goth world unturned, They go into a more Siouxsie direction on the 4th song. It's up beat and more of a fun party mope song. The vocals remain very strong and even though its a male baritone, the melody makes it easy to hear the Siouxsie reference. The drama returns after this song and the pace picks up. The guitar tone continues to be beautifully creepy no matter what direction they are going in. After this they return to a more brooding brand of neo-folk. They are not directly ripping off Death In June, but doing their own thing which is more atmospheric. The acoustic guitar picks out the riff rather than being content to just strum it.

They plug back in and embark on a more sonic fare . The cool thing about the Russian folk influence that dominates this album is the choice of intervals used in the melodies doesn't go with the typical vocal lines you expect from a dark wave band. There is enough spooky in their choices to resonate with most bat-kids. The guitar is very icy and the bass might be more audible on some songs than it others, how ever how many goth band have you already heard that roll down Fascination Street booming in that way so I'm good with something different. The album is well produced with the re verb echoing in all the right places. There is a fuzz of synths on "3o6a" and the drums take on a more 808 like electronic feel, while the vocals dance around it. This succeeds in sounding like nothing I have really heard before though if I was pinning this tail on any donkey it would be early Cocteau Twins. The last songs skips back to a more upbeat place similar to Siouxsie in the pacing though the vocals couldn't be more dramatically different in tone. I'll round this one up to a 10 it hits all the right dark places in me, now to hunt down an actual upload of this. If you are a child of the night, this is worth your time .