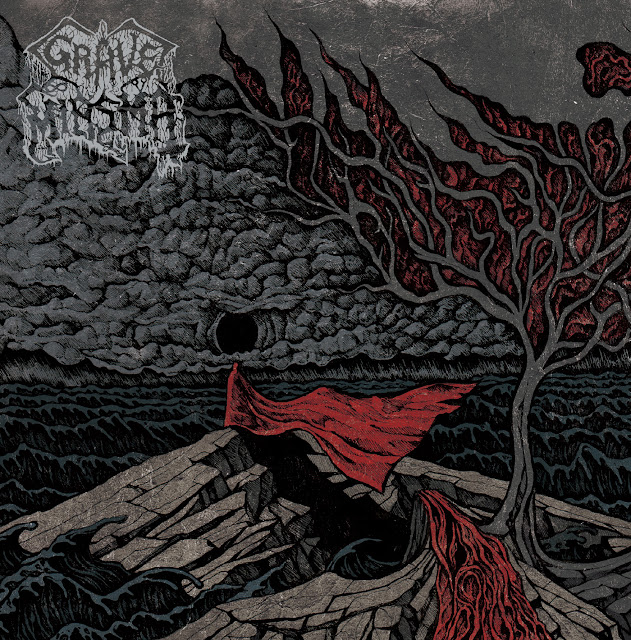 This band from the UK, once had their name thrown around when the sub-genre occult death metal began to crop up on the inner webs. This was characterized by a very cavernous sound and lots of eerie atmosphere, the bulk of these bands also owed a lot to Incantation's earlier work. The atmospherics are still in play they are just handled differently this time around. It's been three years since first full length and for an ep this clocks in 35 minutes making it an album in my book. The first song find them locking into a more machine like hammering that evokes more mainstream death metal bands. They still have enough weirdness at the fringes to keep their sound relatively intact. there are some twists and turns on the opener which might be one of the album's most atmospheric songs, but even then this is more about mauling you with power than smoke and mirrors. The second song "Utterance of the Foulest Spirit" is even more straight forward with it's groove before the ambiance comes haunting around the 3 minute mark. It has a pretty solid stomp with the undercurrent of double bass keeping the song flowing like a ride down the river Styx. The vocals cry out from their guttural bowels with more intelligible roars on this song.There is also a blackened edge to things.

The pounding "Purgative Circumvolution" has more of an old Morbid Angel feel to it. The drummer is still a monster and this fact might be highlighted even more by the fact he is playing some more conventional metal grooves. There is some ranting about Shiva , but the song doesn't really stand out to me and feels like everything else in the land of death metal. There is more spastic chaos to the blast that kicks off "Glorification of the Impure". The verses stick with me a little more the Shiva thing is a theme to this song too. It turns into a blur of blasting . A very dense and foreboding on, but doesn't really show the band's identity.Things get better on "Full Moon Dawn" but the band finds themselves falling in the same mire that most death metal bands waddle in. Being such a big fan of "Odori Sepulcrorum" it feels like the band has conformed to closely to where death metal already is rather than living up to the promise they seemed to make on the first record of taking it somewhere it has yet to go. This album is still an enjoyable listen, I think they are capable of more. I'll give it a 7.5.

This is being released on Profound Lore Records May 6th.