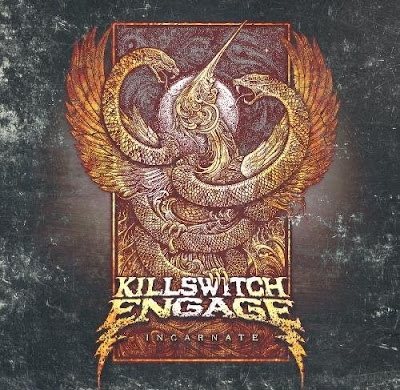 I used to be a huge fan of this band out of Boston called Overcast. When they broke up they split into two bands Shadows Fall and Killswitch Engage. Shadows Fall got off to a better start than Killswitch, though the latter got bigger faster. A flip flop of singers later here we are at album seven. Sure they are lowest common denominator Myspace era metal, but they are good at what they do. The big clean vocal choruses are entact and Leech's voice sounds better than before. The vocal production is so fine tuned that he sounds almost too much like any commercial radio rock singer out there. The first two songs are strong, for what these guys do. They loose some steam on "Cut Me Loose". While they might have a hard core background, but I am not sure there is enough still here for them to be called metal core.

Their very formulaic approach begins to wear on me by the time I get to "Strength of the Mind." They chug back to life on "Just Let Go". The drums could be a little more thunderous in the mix. It's not the melodic elements that I mind, it's the fact that I'm always feeling the heavier edges. While on paper "Just Let Go" should work there is still something very vanilla about it.  They get back some of the needed teeth on " Embrace the Journey" which shows shades of their hardcore past. I do like the melodic middle section on this one as it gives them the dynamic range to the chug toward the end count more. Even the acoustic intro to "Quiet Distress" still leaves all the weight to the big chorus to carry the song. "Until the Days" tends to fade into the background, I had to listen to it twice to form a formal opinion about it and I decided it's pretty bland. The vocals are more Engaging on "Falls on Me", too bad the riff didn't compliment this.

The shades of heavy become to similar on "Ascension". The higher soaring guitar part in the background is the most interesting part of the song. The vocals begin to bore me a little here.He has a good voice, but keeps putting it in the same places.The harmonies improve the song a little and keep me from hitting fast forward. "Reignite" doesn't really live up to it's name and instead plays upon all the conventions of post-Pantera metal, the sped up section is really weak. The break down really needed to provide the pay off and it didn't get me there. The more punk paced "Triumph Through" is another tedious exercise in color by numbers metal. It's funny how this just doesn't seem heavy anymore, I'm sure back in 2002 this would have been next level shit. "Tragedy" might be the second part of the previous song, but it works better on it's own. The lower growl works better than most of the harsher vocals on this album, which often are more forced shout rather than growls or screams. "Loyalty" closes the album and takes Pantera and fuses it with Meshuggah. Production wise this sounds more like a demo in comparison. The big arena rock vocal hook doesn't hook into as well as it did earlier and I think it's because there bag of tricks begins to dull in this far into the album.

I'll give this album a 7, if you think you hearing metal even you listen to rock radio then this will really seem heavy to you. I think most of their fan base has grown up and over this sort of thing. They are still good at what they do I think if this album had been stream lined down then it might work.