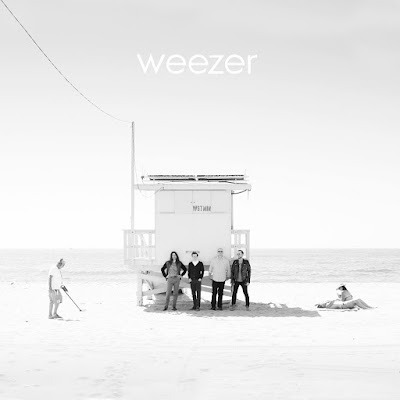 This is actually a self titled album, the band's 4th self-titled album so now they are being reffered to by color. This is the band's 10th album and they should have chosen another color as their can only be one "White Album" and this is far from the ground breaking double album by the Beatles. The only Weezer album's I've either dug or owned were the first two which were pretty great. Expectations for this one could not be lower. I mean if people how launched a petition to put together 10 million dollars for you to stop recording in order to not further smear your legacy then Houston we have a problem. River's and the boys have more than likely kept this going to spite them. I'm shocked how much they have changed under the guise of staying the same. The guitar tone pretty much sounds like every other indie rock band that they paved the way for in the 90s. When it does come in it lacks conviction and leaves the bass layer to carry the song. 'Wind In Our Sail" is where things take a more shocking turn, the chorus reminds me more of the Shins. The vocal melody and how the vocals are produced suggests that this might not be by accident and makes me want to listen to the Shins more than this song, though if I never heard the Shins I might think this was genius.

Things get real silly and poppy on "Thank God For Girls". The lyrics are clever and the pop beat works wells and the chorus is pretty infectous and finds somethings that have changed actually working. "(Girl We Got a ) Good Thing" finds them back in Shins mode mixed with a little Ben Folds and some rock tossed in for good measure. This is a little too happy for my tastes, but above and beyond it feels like they just threw a bunch of ideas at the wall to see what stuck. My favorite song on this album is "Do You Wanna Get High", it comes the closest to reminding me of a band I once liked. "King of the World" has a party rock feeling, with River's personality coming through in a way that makes this passable as a Weezer song. This is one of the album's stronger songs, but years back it would have been their filler. They give a wink to the Pixies on "Summer Elaine & Drunk Dori". This is another song that works for what the band does but if you were to compare it to any song from the first two albums it would fall short.


"The Happy Days" era of 50's pop still influences the band on "L.A. Girlz", though even with wittier lyrics it's not as tightly written a song as the air tight "Buddy Holly".  A tad of auto-tune  might lurk on the falsetto notes in the song's build up. River's voice is generally on the better side of decent, though the production is so slick on this one it's hard to tell where it ends and he begins. The beginning of "Jacked Up" works for me, even as piano heavy as it is. This is much more pop than what I would call classic Weezer, but still has it's moments. The falsetto accents and generally frolicking of this song is more pop than rock.The closing "Endless Bummer" is a mix of folky pop with Beach Boys like intervals in the layered vocal harmonies. It sounds good, but has all the substance of cotton candy. I'm expecting too much from fun pop music, you say? Go kill yourself, these guys are making a living making music so just dialing it in doesn't work. If the entire album sucked then I would say"OK, those guys lost it a long time ago." But that is not the case. This album has some songs that are actually worth listening to but is weighed down by half ass bloat and expect more from these guys , this is good enough for a 6.5, which is better than the bulk of what they have done post- Pinkerton.