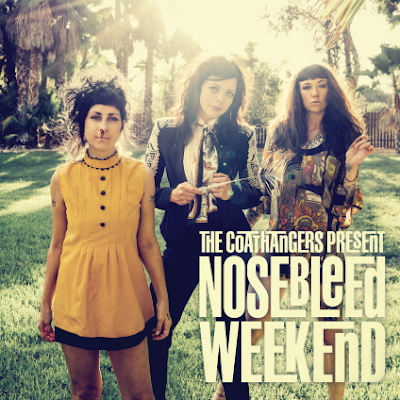 California vibes have smoothed out the more abrasive garage rock band that I once saw playing out in the parking lots of Little Five Points. Vocally they have really improved and the jangle of their guitars is not more in tune. Some of their rough around the edges punk riot grrrl comes across in "Dumb Baby". The play a squeaky toy on solo the pop tinged drive of "Squeeki Tiki". This song fusing the punk energy of the band in a more compelling manner than the previous song. The drums and bass hold a pretty decent groove here. Vocally they go for a brattier also childish mocking. "Excuse Me" is a shade darker. The guitar tone has a hollow smoothness before busting into the more scarping feedback of the abrupt punk sneer of the chorus. It shows a great deal of maturity on the part of the band to use the amount of restraint that exhibit in their song writing. The more Joan Jett grit of the vocals on "Make it Right" work well.

On the title track the band take a step back toward their older garage rock sound. The catchy chorus saves the song, which is more can be said of "Watch Your Back" that finds them in the pitchy more reckless style of vocals that owes more to punk, especially in how the vocals are layered. The regression continue as they relish their immature with the more child like cheer leading the vocals take on " Burn Me". The surf rock guitars are the song's saving grace. The verse riff is mixed a little to far back leaving the drums to carry most of the song. "I Don't Think So" find the garage rock intact but the 60's girl group styled vocal lending more substance. Lyrically they also mirror 60's pop, though obviously on songs like the title track the drug references are sometimes more subtle than others."Down Down" manages to take the punk aggressive streak and meld it with something of more depth. I prefer this to the more upbeat bubble gum they blow on "Hiya". "Had Enough" takes the sleazy grit of Hole and marries to the more genuine rock of grunge jangle. The backing vocals provide a cool variation and the chorus comes pretty close to rocking. There is a more Sonic Youth like quality to the flavor of indie rock they serve on "Copy Cat". A song about band's ripping off other bands, which is fairly common in the scene they were originally spawned from.

I'll go ahead and round this one up to a 9. I enjoyed it a lot more than anticipated going into this. California is treating them much better than Atlanta did, even though they were the critics darlings there. I think they are in an environment where there creative juices are allowed to flow with greater ease out west. If you are a fan of indie rock with a garage rock vibe then this album is a must for you. If you are a regular reader here then you know these gals are not close to what I typically listen to , but this is done in such a way that it draws me in unless they are acting like kids.