Mutterlein : "Orphans of the Black Sun" 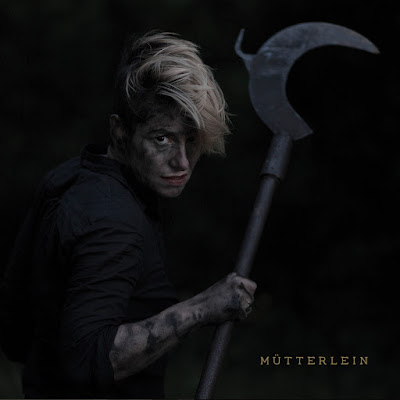 When I run out of music to listen to I begin to dig into the in-box and this morning I got a pleasant surprise in so doing. Mutterlein is a project out of France. This kind of music was tagged as a genre called "witch wave". Which makes sense though witch core might be more fitting as it's more aggressive than new wave. Though the traditional instrumentation of punk is not in play here. Synths and organs are being used, but in a manner suited for a 70's art school horror movie rather than anything to dance to. Marion's voice is gritty and carries a punch yet she can really sing when the song calls for it. Things stay dark for "BlackDog" which is not the Led Zeppelin song.This song is more emotionally oppressive and captures a sinister sound.Her voice carries more of a rasp on this one.
More horror organ sets the tone for "My War". The drumming goes for more of a ritualistic pound rather than any rock beat. The song eventually breaks down into more of a folk ditty in the final minute. The first two songs were stronger than this one. "Heirs of Doom" is more minimalist and down trodden with the emphasis being placed more heavily on the atmosphere. Guitar add noise in the background rather than trying to form riffs around what is going on. This works here because these songs do no lend them selves to riff rock. The first song that really has more of a rocking drive to it is "My Ghost Army". There is a dissonant droning to the more gloom folk of "Mother Black Sun". Her vocals seemed to have explored all of the colors in their spectrum as this point in the album.

> Now you might tell me that witch wave is a thing and that all witch wave bands sound like this, but from the clicking around I did, it doesn't seem to be the case and seems to have fallen out of the whole witch house thing, so it is safe to say that what is being done here gets points for originality. I can easily hear this album appealing to fans of Swans and Jarboe.The spooky organ sounds set this apart from Swans oriented projects. I'll give this one a 9 and see how it sits with me, some of the more atmospheric pieces might not get as much play as the more solid structures, but over all this deserved to be rounded up for many different reasons quality of sounds and the mood captured being at the top of that list.