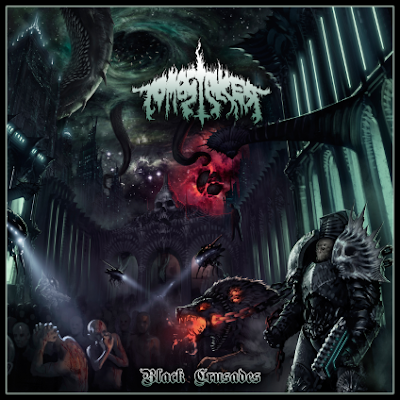 This band does have a nice dark rumble, but don't let that fool you even with all the Entombed influence they are still pretty much thrash. Death metal influenced thrash, but thrash none the less.  They really want to be death metal and that struggle is real. If you asked me I would have never guess these guys were from Kentucky.  So they do have that suspension of disbelief going for them. Just when I'm thinking "Wow, I really dig these guys more than I thought I would" they go and get blasty. Just wanting to be death metal is not good enough, they want to be blackened death metal. The second song disappoints me after such a strong start. The dual vocals don't really add as much as they intend once the groove is lost. They do get some of that back on with "Fate Weaver" . This lets the album regain some of it's momentum and the title track helps add to that . The black metal undertones fight to bubble up.

The vocals work better when they carry more of a snarl. They can pull of the lower death metal growls, but for what sets them apart from hundreds of other death metal bands, it's their thrashing side. The title track feels a little long winded. Some of their songs are pretty concise with the fat trimmed off of them, this just isn't one of those songs and I begin to get lost in it. Even their guitarist is not the world's greatest shredder, or even a shredder at all, the solo section of the title track adds to the song, though it could also stand to lose some bloat. Many of the songs start off with samples from horror movies and "Soul Eater" is not exception. It finds the band back in there trashing place. The song does race away from them a bit when they get overzealous in their quest for blackness.  The snarl of the vocals on this song begin to descend into what could be the scathing growl of any metal band these days. The bass comes up in the mix to fall back into the distance shortly after. I think heavier bass in the mix is one thing that is keeping this album from thrashing harder and makes it sound more death metal.

"Plague Father" opens with the cawing of crow and then launches into it's hybrid thrashing death metal. I do like when the slow down into the more powerful part toward the end and I'm totally o.k with them going in that direction as a death metal band. I do feel they pass up some melodic opprotunites on this song and leave it as middle of the road death metal. They break the eight minute mark again with the closing song "Chaos Enthroned".  They get off on the wrong spiked boot by going into a blast, but as the song winds around get a better handle on it until it locks into a pretty solid groove midway in. To get such a strong start this album did not go the way I wanted it to. I think it found them in an identity crisis not unlike that Atlanta band Vimur fights. You might want to be black metal band, but if that is not what is in your heart, then you should always play what is in your heart.  I'll give this album a 7, hopefully they find themselves heading more toward the place they were at on "Chaos Undivided" as that was some powerful shit.