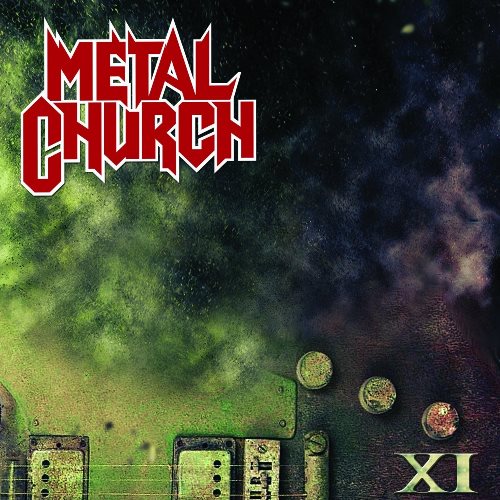 The Metal gods of yesteryear are coming back strong this year, with Anthrax delivering the goods and pending albums from the likes of Testament waiting in the wings. Things have changed since  Metal Church's electric steeple was held high. While well written I don't think "Killing Your Time" is actually metal and falls on more the the hard rock side of the coin. Chances are if this is your idea of metal you too have failed to change with the times. The strum of an acoustic guitar starts of the more aggressive attack of "No Tomorrow". When "Blessing in Disguise" came out the band as actually thrashing, but here they are only marginally heavier than W.A.S.P.

Mike Howe's voice sounds great. He has a good blend of grit and singing actual notes. His melody on the chorus of "No Tomorrow" couldn't be more solid. "Signal Path" has more of a classic metal vibe, that most of us think of us power-metal these days. It doesn't pack as much of a punch. Some of this is due to the production which could stand to sit the vocals back against the guitars that could be louder. The guitar tone is more rock n roll, as the gain is warmer and organic. The interplay with the more melodic passages works well. Speaking of rock "Sky Falls In" has a solid groove, but comes across as a heavier Def Leppard without the bloated arena rock anthem to the chorus."Needle and Suture" find the band back firing on all the cylinders that work best for them. Driving ahead with a heavy chug and Lowe bringing it a convincing snarl.

The riff to "Shadow" sounds like it got left off of 'Operation Mindcrime". I think Howe's performance on this song is brilliant and he has secured his place as one of the most under rated metal singers. His voice has held up better than Joey Belladonna's. "Blow Your Mind" finds things darkening. Howe has an almost post- Fear of the Dark Dickinson croon in some sections. This song works well as it's just the kinda of dynamics I need from my melodic metal. "Soul Eating Machine" goes back to the kinda classic metal Saxon and Maiden dished out in the 80s. Granted that has a little less edge that what Metal Church did in the 80s, but these guys are pulling it off like the pros they are.  The bass mellows out for the groove of "It Waits". Another tune that darker than what I'm used to from these guys, but I skipped the Ronny Munroe years, so maybe they started doing this kind of thing then. It's certainly very different from what I have heard from Howe before and he is proving himself versatile on this album. When he goes up higher on the end he brings back the grit as the tempo changes.

"Suffer Fools" has more drive though not really thrashing it. This would have been one of the more middle of the road moments on "Blessing in Disguise", but it's one of this album's heavier ones. There are some chugged punches that pack a little more weight behind them.The guitar solos are much more rock n roll on this one. On "Fan the Fire" the meet between a hard and hard rock place mixing Zeppelin with Queensryche. The guitar riffs are kind middle of the road so it's Howe's vocals who save the day once again. At times if it wasn't for him this song and a few others would not sound like Metal Church at all. I'll round this one up to a 9.5, it's not a 10 because I know they have hit it harder. The vocals and songwriting make up for the more matured sound which dials the aggression back a bit with age, but they really shocked the hell out of me and proved they have weathered the years better than many of their peers.
Posted by Wilcifer at 3:10 PM