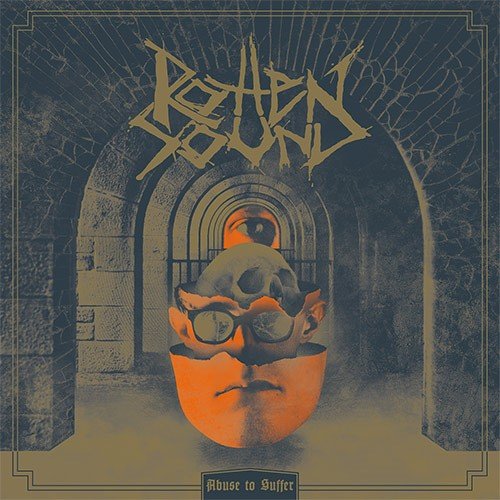 I went into 2016 saying this is the year grind core is going to break bigger and here is a band that will help lead the cause . Even"Cursed" was the first album by this Finnish band that I really paid attention to, these guys are no strangers to the game.  How much of a song can you establish in 47 seconds? Not much it just sounds like someone is demoing song ideas to the rest of their band to write something off of. It takes at least two minutes to get into the brutal groove of these guys which "Fear of Shadows' does a better job of accomplishing. These bursts of songs are very punishing so its hard to image not being numbed out by the type of beating a song like "Trashmonger" dishes out if it were to have go over the two minute mark.

The production is very dense. The guitars hit you like a wall, with the drums sometimes getting lost in the storm of distortion.The vocals are mid to low range growls. There is a cool riff in "Crooked", but you know the rule here is cool riffs alone do not make a good song. The first song that breaks the two minute threshold is the slower grinding pulse of "Time For the Fix". This allows for the song to feel like it is more fully realized than the songs that proceeded it. The most effective under a minute burst is "Slave to the Rats". It goes from a blast to thick neck crushing groove in under 52 seconds. They hit two minutes again with "Brainwashed" which is more straight forward for these guys. The drumming is impressive throughout the album, but this song might be on the album's high light reel.

At times the more hard core side of the band comes out as displayed on "Cannon Fodder' that also find the band adopting an almost Entombed like thickness to the riffing.Without question this is heavy as all fuck. Sometimes this heavy get's the benefit of varied tempos on the more sludge like trudge of "Yellow Pain". The vocals on this one go up into a higher curdling shriek. The mood over all on this song stands out from the nine songs before it. A song like "Machine"takes the album title literally. It's pretty effective even into the spastic out bursts of insane speed. Burly bass leads into the beastly blast of " the Clerk" that possesses a mammoth rumble, the following song "Caged" could have been the next logical progression if this was a more adventurous genre .

The minute long "Retaliation" is all teeth, which works if there was somewhere else to go, but their economic sense of song writing leaves the band frequently painted into a corner. "Inhumane Treatment" finds the band much more effective at crushing you when given two minutes to work with. When they kick up the gears too fast for their own good the song does stumble a little.The last song has a cool ending, but this song is the exception to the rule and the band doesn't make the most with the time they are given. I'll give this one a 7.5. Some of these little ditties are compact grenades of heaviness the rest are cool riffs here and there, but need more to them. If this is your thing and you are really ADD, then not only has this review been to long for you, but you can round it up.