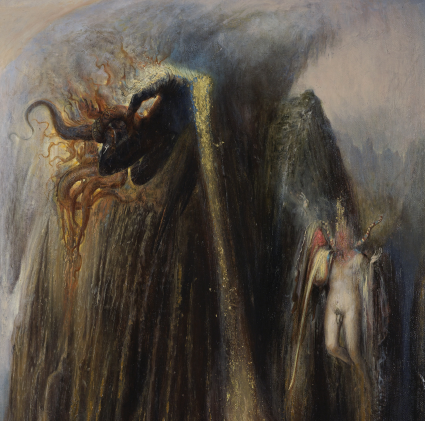 Here's an album I have been waiting for. This project out of San Francisco is bringing some of the wonderment back to death metal. Death metal all too often defaults to re-hashing what Incantation and Morbid Angel have already done.  Little time is wasted digging into the meat of the metal on this one. The helter skelter sense of groove and trippy atmosphere that make this band so awesome are all  intact.The double bass hammers harder here beneath the rubbery bass lineS. There is aggression to this, but  not conveyed in the manner you expect from death metal. The guitar tone is one thing that sets these guys apart from their peers.Not as saturated in distortion, the cleaner tone  has a more organic warmth. They toy with the syncopated riff in "Cabals of Molder" with effected sounds whirling around the the mix. It's not secret that darkness is an essential element of heaviness to me. This factors into what makes "Maat Mons' Fume" really stand out to me. They have more of a proggy sludge feel than death metal, however when the time comes to spazz out the solo section leading into a burst of blast gets crazy enough to belong on a Sleepytime Gorilla Museum. This is all done with much more of a deadly seriousness.

"7 Ascetic Cinders..." reaches a place where the level of  the experimentation reaches surreal n more abstract proportion that gives the song a feeling of intangibility.  The chaos stirred up is one of high prowess, though the song writing element. "Gaunt Vertigo " finds them  throwing down the gauntlet to challenge the listener. The rasp of the vocals becomes  more intelligible for "Subliminal Lock" which hits a groove that is like a cracked out version of "Where the Slime Live".  This is not to say they are aping the Tampa death metal pioneers here, but rather coloring with a similar shade of sinister. They linger on atmospheric noise going into the final song "the Apocryphalic Wick". It creeps into a rasped chant before everything falls in around it and builds up momentum from there. This song works off of a much simpler premise than the rest of the album really alternating between the two sections .

Overall this albums brings to life everything I could want from them. More progressive than just death metal loaded up on a ton of drugs. The bass playing is some of death metal's best this side of Cynic, who lets face it are off in the land of elves with Rush at this point in time. The experimentation is tempered with aggression, though it's not just a monochrome brutality. The playing is dialed up past eleven on this one, but as a collection of songs I'll round it up to a 9.5 and see how it sits with me. Some songs are more obtuse than others, but it's safe to say these guys have cemented their own sound at this point and how weird and wonderful it is . This beast will be unleashed by I Void Hanger Records April 15th.