LACRIMAS PROFUNDERE : 'How to Shroud Yourself with Night" 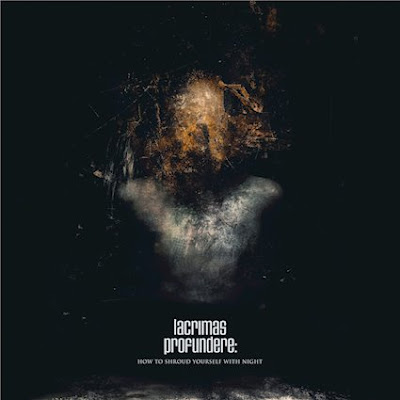 The guitarist and founder Oliver Schimd is the only original member. This is also Julian Larre's second outing with the band since his debut in 2019 with them.  Normally these things would make me skeptical, but here it seems to have freshened things up in the right direction. Things are not far from the Paradise Lost or Moonspell zip code. The song writing ranges from death n roll to doom all flavored with the goth trappings this band is known for. There is sometimes a more nu-metal swagger to some of the more syncopated grooves. I guess that has always been a thing for these guys since their inception, it just has gone through different cycles depending on how doom they were feeling.

"Nebula" is an interesting blend of varied styles of heavy from the more goth like sound to a more mainstream almost melodic metal core type sound. The chorus soars in that direction. At times this makes me think of H.I.M . Certainly, Ville is more of an influence on Larre than Andrew Eldritch. Since Vallo is not making this kind of music anymore, there is a void to be filled, that I do not mind. Things get darker on "the Certain of White Silence". It is a better direction than the H.I.M core stuff. Which still works for what it is, I just prefer what they do sonically on the more atmospheric portions of the song, though when thing speed up on the chorus is feel awkward, like black metal being inserted where it does not belong. The almost rapped anguished vocals on the verse, work better than expected. It is an example of the lurking nu-metal influence.

The chorus of "Unseen" works better than the chorus of the previous song. I am no crazy about the harsher vocals on this one, as they remind me of Lamb of God.  "The Vastness of Infinity is not breaking any new ground and works of the goth metal of the 90s meets the Myspace Metal of today. This combination of styles actually works well on "To Disappear In You".  The growled chorus works for what this is but doesn't blow me away either as the verses are cool as fuck. There are a few goth moments that play it fairly safe like " An Invisible Beginning". It works as a song, but metal is more about taking risks. There is more of gamble on the last song, which finds them continuing to blend a more growled modern metal sound with 90s goth well. Overall, I think this album shows growth and peaks my interest in a band I was otherwise lukewarm to when they came out, which speaks volumes in both cases since, my tastes fall in the lines of what their target audience would be, I will give this a 9.