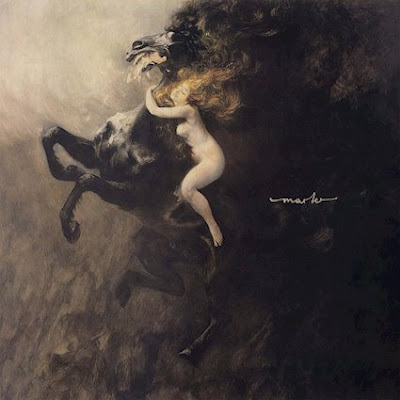 This German band is pretty much in line with 90s black metal when the album opens with all the metallic anger you might want from black metal, while still allowing for some sonic depth. Things grow even more melodic on the second song and that gives me hope for the rest of the album to come.  It is more dynamic and for black metal of this sort very well written as the compositional value holds up against any other form of music. Sure, it is a 9-minute song, but very engaging. There are sung vocals that surface, but it is later in the song and in the background, they are not done in a formulaic manner.  "Labsal" comes snarling back much harder.  There are still some catchy riffs wedged into the tightly wound attack of the guitars.
"Lethe" is still very effective at what they are doing, what they are doing is conforming more to the expectations of what black metal should sound like. This is done in a way that is dark and angry enough to convince fans of the genre they are legit. "Parheila" also goes in a more aggressive manner, but they do allow for some breathing room midway into the song where it breaks down into a more atmospheric passage. The exotic chord progression it simmers on is pretty cool. "Odem" also finds them embracing a more melodic under pinning to balance out the snarling aggression they lash out at you with once locked into the verse passage. Though momentum races away with them and the need for speed finds them falling in line with what many black metal bands are doing or have done. Not their most original moment. The fact this album is really well produced helps, because it sounds great and there is a lot going on in the mix.
"Menetekel" reminds me of Shining in some places. The Swedish band not the prog rockers. They have not gone all black n roll, here, but similar dynamics in certain sections of the song. The last song has more of a  traditional feell in some of the chord progressions, and the big epic nature. I will give this album a 9, it's really well done, even when it conforms to the shades of black more recognized by the masses.
Posted by Wilcifer at 9:32 PM