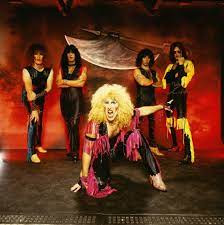 This is the debut album by a band who would go onto bring this early metal to the mainstream, but on their own terms. This album opener with a song that is darker and more tension that the band you might only think of as not going to take it. I am listening to the Rhino remaster of the album, but this is really well produced. They have Pete Way of the band UFO to thank for this as he produced the album.  "Bad Boys of Rock N Roll" is more of a party anthem that owes equal portions to 1950s rock and Alice Cooper. By the time they got to their big hit "Stay Hungry" they had perfected this sort of thing. They get back to a darker more dynamic sound on "Run for Life". It goes from a slower brooding to an almost Judas Priest like riff.

The Priest comparisons do not end there as they also have a song called "Sin After Sin". There is a more AC/DC feel to "Shoot Em Down". When it comes to these kinds of rock anthems, this works better than most. Even when they are in a more mainstream rock mode, they are more aggressive than the bulk of the bands in the hair/ glam scene they typically are lumped into. This shows they are more deserving to best filed alongside bands like the Scorpions and Judas Priest. They continue to cement themselves in metal history with "Destroyer" and the title track. "Destroyer" being the heavier of the two with a more deliberate grind.  The drumming is perhaps more Iron Maiden like on "Tear it Loose" . Fast Eddie Clarke from Motorhead plays a solo on this song.

"I'll Never Grow Up Now" was not on the original pressing over the album but when Atlantic Records re-released it in 1985, after "Stay Hungry " broke big this was on it, and that is when I bought the album. It echoes more of the music at the time, like Quiet Riot. They return to a more AC/DC feel with "Day of the Rocker". If you ever wondered if Dee Snider can actually sing this answers that question. I will round this one up to a 10 it's pretty classic.