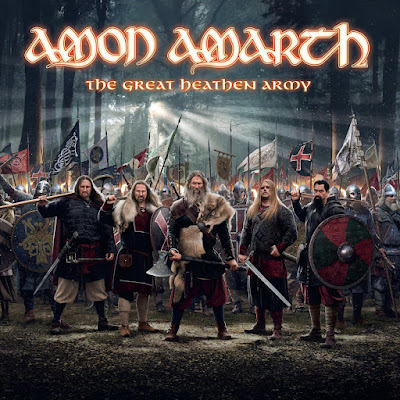 They might be from Sweden but have more in common with Ikea than Vikings. I do not care how many boats they have on stage. They play a catchy style of death metal that has earned them a a place at the top of the death metal heap, packing out venues with stages big enough to fit those fake shapes on. They continue to sharpen the songs hooks showing that you do not have to have a singer that actually sings in order to have thousands of fists pumping to your anthems. The first melody that employs any type of Scandinavian folk elements comes before the shuffling verse of "Heidrun".  Aside from that it chugs along a similar path as the first two songs. That path is very well done and airtight in terms of production, but these guys are in the elite tier of professionals at this point so you would not expect any less.
When the pace picks up on "Oden Owns You All" they sound like any other top tier mainstream death metal band.  There are some really killer riffs, thought the rule here is cool riffs alone does not a good song make, they have arranged them in such a way that the long boat might not be reinvented here, but it works. The more mid-tempo march of "Find a Way or Make One" is a more effective display of their talents, even if it compromises the sheer heaviness of what they are doing. You can also hear more traces of conventional classic metal on this album. Sometimes they default to stock melo-death thrashing with songs like " Dawn of Norsemen" where some of the freshness begins to fade the deeper, we get into the album. This sound is still bound to make some heads bang but working off a formula for sure. They break up things by throwing a melodic passage of acoustic guitars in, but you can predict how it is going to get back to the ride over the metal fjords again.
They are like a more chugged and growled version of Iron Maiden on "Saxons and Vikings" which must be their version of "the Trooper".  It also features guest vocals from Saxon's Biff Byford. I am more impressed by the crunch of "Skagul Rides with Me". Though the one-dimensional growl of the vocals is getting weary at this point in the album. The chorus is also not the album's strongest. There is a pretty killer riff to "the Serpents Trail".  Though it never really builds into anything more intense and coasts around the established them. But overall, this album is a pretty solid display of a band in their stride, predictable sure, but on point for what they do. I will give it a 9.
7.6
Posted by Wilcifer at 8:56 PM