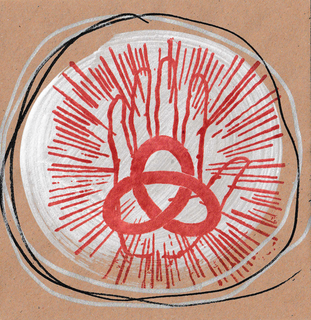 This is not the first time Gira has released what amounts to demos for an upcoming album in order to fund said album. We heard this with the demos for "Leaving Meaning" which was titled "What is This?". Almost identical in its approach his vocals sit at the fore front with Gira also playing guitar. Lyrically the first two songs are about learning how to do life on the most basic level. I prefer the more baritone resonance of the second song. The mood is stark and consistent with the mood you want from this band. Syre in a stripped-down manner such as presented here there is almost a folk like manner if by folk, we are using Death in June as the definition.

"Parasite" finds Gira take a more dynamic shift in the sonic progression of mood and melody. Things start darker and then come to a more relaxed and brighter place by the end of the song. Lyrically it seems to deal with some personal problems he was dealing with a few years ago when cancel culture in hipster New York found itself creating an environment where he could be attacked. At 68 he has still figured out how to make the most of his voice, with his emotive croon still sounding pretty strong. Some of these songs work better in their skeletal for than others. I can hear how "Los Angeles City of Death" might sound with a full band, which works better than the current form, which I appreciate lyrically. The stripped-down strum of "Ebbing" needs more fat to it in order to fully realize this idea of a song. With "Why Can't I have What I Want Anytime I Want" works off a droning strum that will become more interesting once this is fleshed out but in its current form, this commentary on today's society it pretty cutting even as is an almost heavy in this form as well.

There is more of a dreamy Psychic Tv like drone to" the Memorious", that possesses more melodic depth than the stripped-down drone to "Michael is Done". The minimalism that abounds on the album is due to the nature of what Gira is going here, you can hear more form and function on the songs where his vocal melodies are more capable of carrying the weight of the song. Even a melody that is a bleakly simple as the one found on "Unforming". The last song is too straightforward, and not really what defines Swans, perhaps more of an Angles of Light thing. As things stand here, I will give this album of demos a 9, it is very relaxing and captures a more stripped downside to the drone,