Machine Head : "Of Kingdom and Crown" 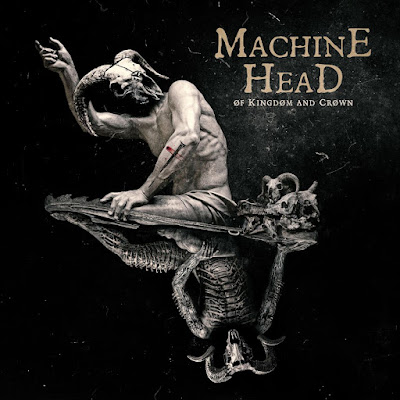 I prefer when they were letting freedom ring with a shotgun blast and not really into their forays into nu-metal that followed. They began integrating actual metal, which you can hear on this album though diluted with aspirations to get the airplay of modern rock bands. The ten-minute opener has some cool melodic moments before roaring into what they have been doing now for decades. Flynn is the sole original member; he is still joined by Jared of Sanctity and Waclaw of Decapitated. In terms of heaviness there is no way this album comes close to the new Decapitated, they do go full steam thrash on the second song, but I think I prefer the more thoughtful opener as even more all the aggression of the second song, it feels more contrived.

"Become the Firestorm" proves it pays off to have guys who use to play in death metal bands in your band as it makes you capable of being able to step the gas as needed. They summon a powerful that is more in line with what Flynn normally does here as well. Iam ignoring all the Operation Mindcrime like interludes, they just do not add anything to the album. "My Hands are Empty" works pretty well with its melodic shift in the dynamic hooks of the chorus. It is clear Flynn is a great songwriter, as he has kept his career going on it after all these years. That does not mean he manages to avoid of the pitfalls o when harder music hit the radio in the 90s as there is a Slipknotty feel to "Un hallowed".  I like melodramatic music, but not the kind that gets endorsed by energy drinks.

"Kill Thy Enemies" is pretty convincing with its mean guitar, the lyrics sound like Flynn has been on social media for too long.  The find a decent balance of heaviness and melody on "No Gods No Masters" though the chorus is a little overboard. "Bloodshot" is the first song that feels like filler to me. Sounds like microwaveable Pantera. The drumming on it is impressive, but when you are a metal drummer that is expected. "Rotten" does something similar better. If you need that kind of mosh inspiring metal, there it is.

"Arrows in Words from the Sky' is one of those radio power ballads that has the blazing guitar solo and, in their case, heavy enough to be metal, but lacks the needed, the vocals are pretty great, and this album has good vocal production almost across the board, there moments in the mix some of the secondary vocals could come up. They included an acoustic version on this album to, but that seems redundant. The last song seems like it sets out to be a summary of all their metal tricks. Considering how the vocals have been this album's strength, I do not think solos alone warrant the need for an instrumental. I will round this down to a 8.5, in the struggle for relevance they do not always play to what best suits them as band, but overall, the song writing of Flynn redeems the album.