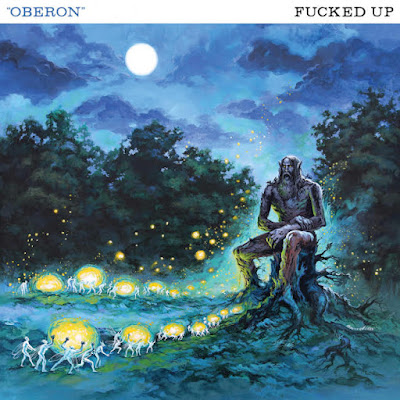 What is fucked up is how they have decided to just go ahead and become a metal band. These guys have always been weird, so while it is a strange progression from the burlier angular noise rock they were making, this is an absurd leap into the unexpected. I am more surprised by how they are doing it; this sounds like the second coming of Cathedral. With the vocals serving as the main culprit, yes there is also a good dose of Celtic Frost mixed in with other weirdness like synth sounding effects.  They could have had this sound, but if the vocal had kept just their angry scowling it might not have been as noticeable, but the lyrics are not about elves and angels, it is the crazy way they are delivered vocally and the crazy way the lyrics paint these pictures that put it in league with Cathedral.
The funnier thing about all of this is not only do I not mind, but I think this might be better. They might be better at doing Cathedral than Cathedral was at doing themselves. Gone are any degrees of Black Flag that might have been flowing in their veins. It is however still traced back to their hard core past to make this more sludge than it is doom, though the lyrics are very doom. The album itself is a tribute to " A Midsummer Night's Dream" , which lyrics connected to classical literature is a much more metal thing than punk. The second songs throbs with a groove that snakes under the drums. More layers of synth atmosphere than what you might normally think of sludge being possessed by.
"Mashhit " more aggressive with a angular riff that seems as propelled by the synth as it does the bass and the way this is mixed it is hard to tell them apart. There is also a weird under current of electronic pulse beneath this song when it is stampeding you. They close the album with an odd cover of "Saint- Saens " the Aquarium" this is the least impressive of the songs though they get credit for being ambitious enough to attempt it. I will give this album a 95, catchy for what they are doing which is pretty unique even in the face of its influences.
Posted by Wilcifer at 2:03 PM

Email ThisBlogThis!Share to TwitterShare to FacebookShare to Pinterest
Labels: 9.5, Fucked Up, sludge