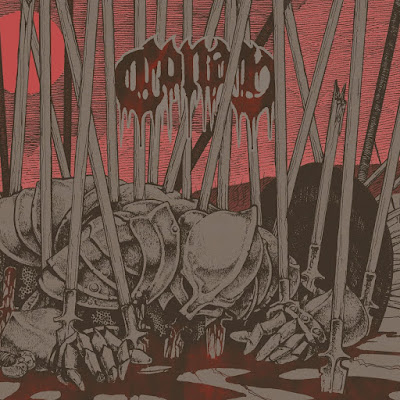 The 5th album by this British band, carries all the thundering thump that you might expect, though when compared to their earlier work resonates with more sonic heaviness. It opens with a ten-minute pounder.     The vocals howl with more conviction. Things are not always at a doomy plod, in facT they are pretty aggressive tempo wise when it comes to "Levitation Hoax". They are more sludge than doom, when considering the apocalyptic darkness that is carried in their sound. They even delve into more traditional almost modern metal grooves with "the Ritual of Anonymity", It solidifies calling them sludge in the manner that it moves.
"Equilibrium of Mankind" has a heavier weight to its throb. The tempo is less aggressive than the previous song.  The production of this album has levelled up when it comes to giving the guitars a dense fuzzed out yet warm wall of crunch. I think when it comes to being able to distinguish doom from sludge, people are often too quick to call something doom. Granted it did evolve from punk rockers trying to play doom. Being deliberate in the pounding does not equate the funeral procession tone of the more emotional doom. They are never so absorbed in the sound that they forget to turn things into a song. "Righteous Alliance" grooves with its lumber. The shouted vocals are sometimes double with a more crazed higher vocal over a lower throaty bark. Never really sung but phrased in a manner to accent the riffs.  They shift the dynamic and back off from being as in your face in the last two minutes.
Synth sounds add to the atmosphere as they begin the last song with more of a drone. While it has a solid sound if you just want some to provide a background to hitting the bong, it is also not really bringing a tone to the song as a whole. I mean I am never going to say, "Damn I need to hear that six-minute drone they did on that one song". Though melodies and riffs are things that might ger stuck in my head and make me look forward to hearing a song again. When I say six-minute drone, it extends well beyond that, but the drums switch things up accent wise making it feel like it is going somewhere when it is not. The keyboards being doing something ten minutes in to this 12-minute song.  I will give this album a 9 as the last song is the only one that does work for me, overall, it proves you can still be heavy and write songs worth listening to.
Posted by Wilcifer at 3:20 PM