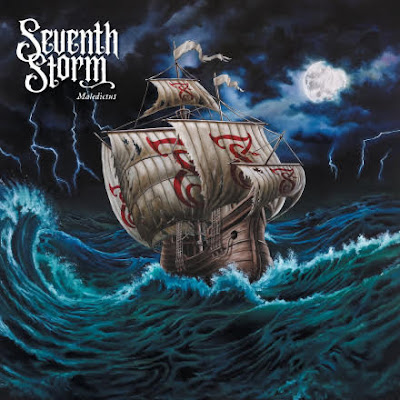 The drummer of Moonspell has formed a new band and is trying to admit it is pirate metal. He claims it is because he is from Portugal, and he is just celebrating his cultural heritage. Funny when Viking metal bands do that, they get called racist. there is a strong current of traditional metal flowing through this album. The vocals are throaty yet sung. "Sudade" finds them becoming increasingly power metal. The bonus to this is with the grit of the vocals there is more of an Iced Earth or Symphony X feel to this take on power metal. If you are into the kind of soaring anthems power metal is most often known for then this might be the boat for you to catch.
There is little in the way of frolicking drinking songs that pirate metal is known for so that works for me. "God of Babylon" almost reminds me more of Disturbed thanks to its impressive groove that drives the verses.  Unlike most power metal, there is a darker current running through these songs. Not evil, but ominous. They sail deeper into darker and more melodic waters with " the Reckoning" which finds them giving the vocals more room to open up and add another layer of dynamics. They pick up to a more thrashing speed, that simmer down by the time they get to "Seventh" which has am more epic power metal feel with soulful vocals belting it out. They pull out blast beats at times but tend to return to big melodic choruses. There are guitar solos but that is not the main focus of the songs.
I really like the more nuanced vocals on "My Redemption". The rougher more belted chorus is not groundbreaking, but the melody is catchy and well done so that is a win in my book for these guys. The eight minute "Haunted Sea" might be the longest song on this album, but as far as sprawling epics go these guys used a great deal of restraint in their compositions. The sung vocals carry a great deal of grit here.  The song builds in places like a Pantera song, though never goes into a moshy break down, it gets bigger and more epic. I will round this one up tp a 10 as it is one of the better metal albums of this kind I have heard in sometime, this comes out August 12th on Atomic Fire Records
Posted by Wilcifer at 5:55 PM