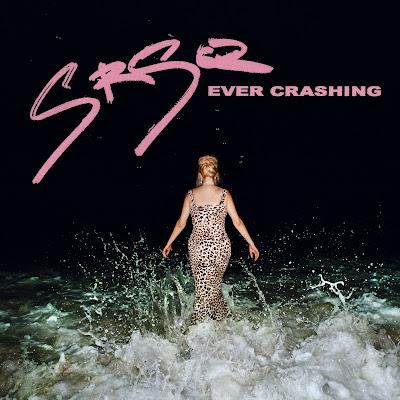 Kennedy Ashlyn's former project Them Are Us Too were one of those bands whose influences they were paying tribute to was so apparent, in their case the Cocteau Twins, that if you are a fan of the said band then you welcome them. In the case of the Cocteau Twins they are not making any new music so I would welcome e a band that was filling that void for me. There is a hint of that influence still lingers, but she has come into her own artist under the SRSQ moniker. Even more so with this album. She is no longer basking in ethereal darkness and stepping into an 80's themed neon. The opening track shining even more brightly in the sonic colors being employed. It is a bright cloud of ambiance, but the second song "Saved For Summer" is more airtight in terms of the kind of hooky song writing that colored 8os new wave.

The title track is almost like a k-pop power ballad, but somehow it manages to work. She finds a better balance on "Used to Love". And it falls more solidly in the bonds of catchy dream pop. The percussion has more of a retro sound, yet the emphasis is on the vocal melody. A great deal of credit for this album's sound goes to producer Chris Coady who has also worked with Zola Jesus, Beach House and Slow Dive, helped pep him to tackle this task. The title track flows really well and finds a way to blend the cinematic grandeur with the atmospheric pulse of her earlier work. With a song like "Fear" you can really hear how the clarity of her singing has grown. How her voice sits center stage and less obscured in the mix, helps to shed light on this.

The overdriven bass groove to "Winter, Slowly" sets up the groove for the song, the melodies then draped over it provide a sugary dynamic contrast. The more languid atmospherics of "Abyss" floats in a dreamy David Lynch like haze with reverbed out ring of guitar echoing throughout the song. It is however not as focused on the melodies that have made this album work so well up to this point. "Elan Vital" is back on a more shoegazing pop path that makes for a pretty solid songs in terms of the backdrop for her melodies to sprawl out over. The drums to the last song give it more movement and break away from the dream soaked the bulk of the album is cloaked in with the vocals breaking through to embrace and newfound love of sunshine. The brighter tone of the album still works and finds this to be a monument of growth for Ashlyn I will give this album a 9.5.

Email ThisBlogThis!Share to TwitterShare to FacebookShare to Pinterest
Labels: 9.5, dream pop, SRSQ, Them Are Us Too