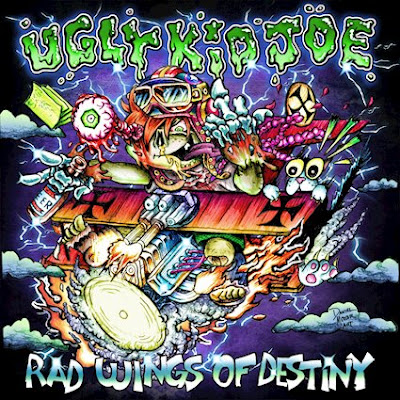 This band was the bridge between cock rock and the coming alternative rock wave. Their first two albums were pretty great. Though I have not listened to either in some time. The very AC/DC inspired opening track is not what I remember the band sounding like. There is more of a Guns N Roses feel to "Not Like the Other" which a more glam shuffle, until it gets to the chorus. I guess these dudes are smoking a ton of weed in their old age as that is the first thought I have when it comes to the chorus.  They are full-fledged hippies, but it leans enough in that direction. But in all fairness so did Aerosmith at one point in time so the connect the dots is not in left field.

It is not until the unlikely ballad "Everything's Changing" do I hear what it the level of songwriting I expect from them, even if it comes at what they do from a less obvious angle. Yeah, I know their cover of "Cat's in the Cradle: marked them as fellow champions of the 90s power ballad. They are certainly better at recapturing this than Candlebox, who has totally lost it. These guys have not lost it through the years have not been the kindest to a band that has not stayed as active as perhaps they should. They do have drummer Shannon Larkin on the throne. He keeps "Kill the Pain" moving. It sounds like a moodier version of Deep Purple with some more ominous guitar building as the song progresses. It does not sound like Ugly Kid Joe but sounds good.

The obligatory cover is Ray Davies " Lola" which given the lyrical subject matter fits right into 2022, The rock it out just enough, this is not the song I would have picked for them, but they make the most out of it. "Dead Friends Play" is an ode to the rock bands that inspired them. "Up in the City" has a bit of a funk swagger to it but sounds more like Queens of the Stoneage than Ugly Kid Joe. They are known for working in other genres, so country is not a surprise on "Drivin and Drinkin". The AC/DC influence from the opening song, returns on "Failure" but this time is done in a way that feel more like who they are.   I am not sure about "Long Road" as it sounds too much like bands like Blues Traveller or Hootie and the Blowfish that Ugly Kid Joe was the opposite of.  I will give this album a 9, while it is better than the bulk of what is being passed off as rock music today, it is not the band picking up where they left off either.