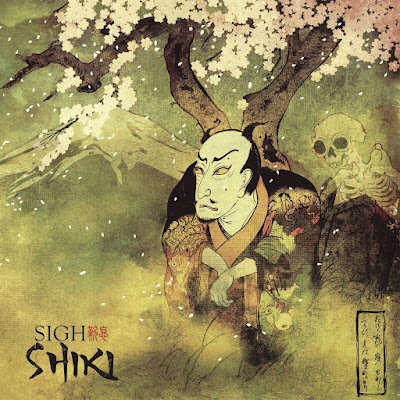 Heavier and less progressive than their past few albums, they also offer up more blast beats in the first two songs than I have heard from these guys in the past decade. Not that they are back to being a black metal band. In fact, this is also thew most accessible to other metals that I have heard from these guys with dumbed down grooves and less manic jerking into other styles, they do cross a broad range of musical colors, but it is done in a more flowing organic fashion. There is a little jazz in the first song and the cadence of the vocal phrasing reminds me of a Run the Jewels song even though there is no rapping.

The very deliberate riffing continues in a straight-ahead assault on "Shikabane" which is almost punk until the very adventurous drumming and guitar solo kick in.  This has a fun jammy live feel, when they go into a more spaced-out middle section.  Things continue to lash out with this renewed aggression they have found on this album. They are not taking the easy way out and just defaulting to the tropes of black metal. I really like the Middle Eastern chord progressions to "Satsui" and appreciate the dark and moody direction the song eventually wanders off into. Though there are some almost hip-hop inspired elements there which makes this the second song I have sense this under current.

"Fuyu Ga Kuru" leads me to believe that they had a moment of clarity. The band was writing songs and saw the writing on the wall that they will never be accepted as a prog rock band due to their heavy metal past and instead they need to make a classic metal album the likes Dimmu Borgir might try. There are riffs that remind me of the title track from Seasons of the Abyss as well as King Diamond. Along with Pink Floyd space excursions that are shorter than the galloping that takes place.  The guitar solos are very rock godlike. I have been saying people have been sleeping on this guy's shred powers for some time.

Things do get a little more proggy in the mood to "Mayonaka". The more snarled vocals are sung kind of crazily on this one. /There are plenty of keyboard solos and guitar solos to keep the prog crowd entertained here, though unlikely they are going to embrace this album as a whole unless they are into metal. I will round this up to a 9.5, as these guys are teaching a masterclass in metal and the prog smarts are there without getting carried away.