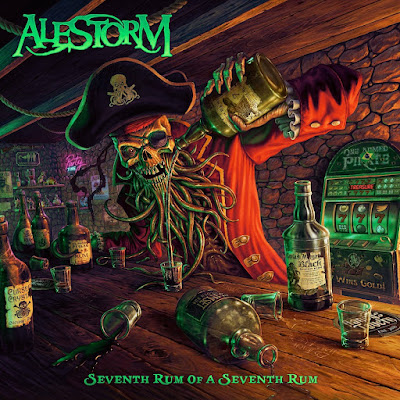 I will be the first to tell you pirate metal is not my think. Really it tends to have more in common with ska or polka due to the heavy chorus of brass piping in, along with the jolly prancing. Folk metal tends to have a similar problem of not being dark or aggressive enough and excessively happy. I will however admit these guys are good at what they do and skilled musicians. They even throw in video game sounds, which makes me wonder why they are not playing conventions like Dragon Con. The guitars to "Cannonball" summon more grit, but it feels a little like pop punk at times. Lyrics like "stick a cannonball up your cunt and your dick in a blender" are really too silly.

"P,A,R,T,Y" is more jovial foolishness, this time with elements of dance music inject into it. I think what gets on my nerves but is not a deal break with these guys is when they refer to things like blenders or disco balls which did not exist during the time pirates sailed the high seas. It feels like breaking character. The dance thing returns for "Under Blackened Banners' and begins to make things sound like the soundtrack to anime. This is not far from the general tone being set for the album as a whole. Some songs just have more well-placed chugs and gallops in the riffs. The trumpet fanfare going into the title track is a little too much for me, it is just pounding polka at this point and vocals are all beginning to sound the same. No matter how fast you play happy chord progressions they are still going to be happy chord progressions.

"Bite the Hookhand That Feeds" is a little more aggressive in the attack of the guitar but largely upholds the tone that pervades the album.  "Return to Tortuga" is a better song than "Come to Brazil", both are more upbeat than what I normally want from my metal, if this is even metal at all, but they are most effective doing what they do on "Return to Tortuga".  The album closes with more of a folk metal feel which is we are going to be honest is the cousin of pirate metal. The happy tone of the album aside they do what they do pretty well I will give this album an 8.5, not something I would listen to on a regular basis, but I know there is an audience for this sort of thing and if it is you kind of thing you will enjoy this album.